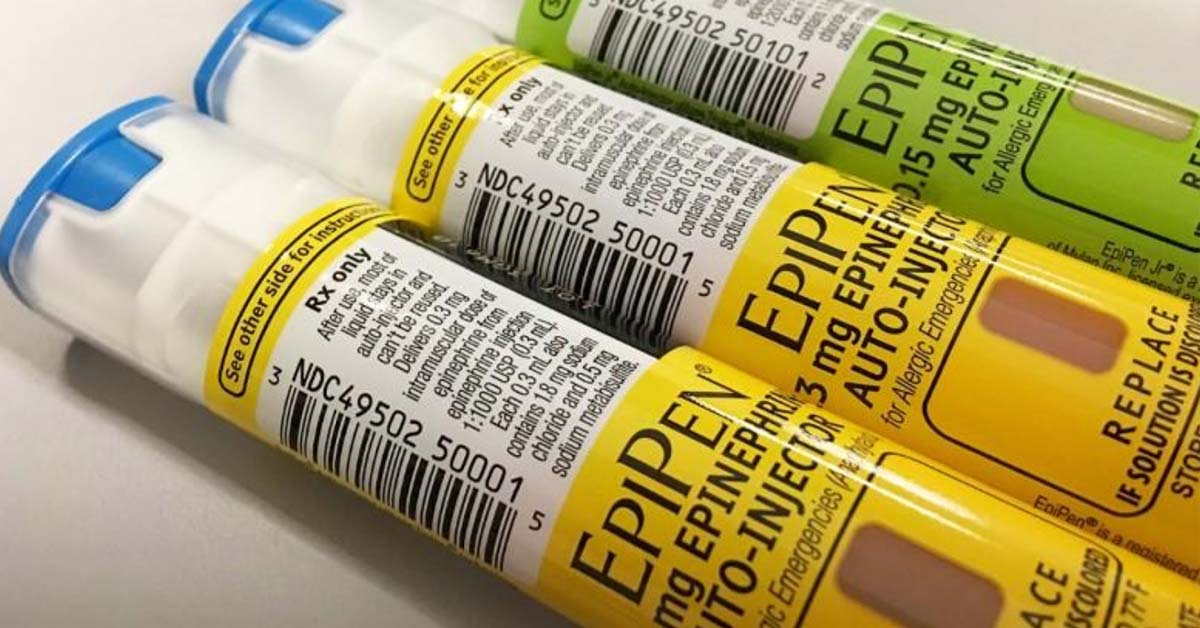 An article we published last week referring to the coroner’s report in the Natasha Ednan-Laperouse inquest sparked much discussion. Fifteen year-old Natasha suffered anaphylaxis after eating a sandwich purchased from a Pret A Manger outlet at Heathrow Airport that contained unlabeled sesame.
First and foremost, we believe Pret A Manger and the UK labeling regulations by which they are guided bear much responsibility for the death of Natasha, especially in light of a second death that was reportedly caused by food served at the chain.
That said, the report – issued by Dr Sean Cummings, the coroner presiding over the inquest – made it a point to call out EpiPen as “inherently unsafe” for producing devices he said contained too small a dose of adrenaline and had needles that were too short to reach muscle.

Dr Cummings is not alone in his assertions. He is backed by a report from the UK Resuscitation Council recommending longer needles and larger doses for epinephrine auto-injectors.
EpiPen’s reputation has been tarnished in recent months over shortages attributed to the device’s manufacturer, Pfizer, due to manufacturing difficulties. These issues were brought to light previously by the Food and Drug Administration (FDA) in a letter detailing numerous issues.
Dr James Baker, Founder and Director of the Mary H Weiser Food Allergy Center at the University of Michigan and former CEO of Food Allergy Research and Education (FARE), issued the following tweet in response to the article:

Watching this circus of an “inquiry” and find the coroner’s statements about EpiPen “fatal flaws” ridiculous. Dose of epinephrine in EpiPen is adequate and the device works when used. Likely problem was long delay before using EpiPen!https://t.co/4P5VzMwVpu via @SnackSafely

We at SnackSafely.com have no desire to undermine the public’s trust in EpiPen or other epinephrine auto-injectors approved for use in the US, and – as we have in the past – urge all those with food allergies to “Take 2 epinephrine auto-injectors along everywhere… every time.”
But that does not mean we should accept as gospel the needle lengths and dosages currently approved by the FDA and sold by prescription. There are numerous studies that indicate they may be less than optimal to the task of combating anaphylaxis for a significant portion of the allergic population.

As examples, we call your attention to two of these studies published in respected peer-reviewed journals on the subject.
In “Epinephrine Auto-injectors: Is Needle Length Adequate for Delivery of Epinephrine Intramuscularly?“, published January 2009 in the journal Pediatrics, researchers looked at ultrasound studies of 256 children ages one to 12 years of age and determined that 12% of those that would have been prescribed the “junior” epinephrine device and 30% of those that would have been prescribed the “adult” version of the device would not have received delivery of epinephrine intramuscularly – the optimal location for epinephrine absorption.
They concluded:

The needle on epinephrine auto-injectors is not long enough to reach the muscle in a significant number of children. Increasing the needle length on the auto-injectors would increase the likelihood that more children receive epinephrine by the recommended intramuscular route.

In another study, entitled “Auto-injector needle length may be inadequate to deliver epinephrine intramuscularly in women with confirmed food allergy“, published July 2014 in the journal Allergy, Asthma & Clinical Immunology, researchers looked at ultrasound images of the right mid-anterolateral thigh of 100 food allergy sufferers under minimal and maximal pressure.
They determined the EpiPen needle length of 15.2 mm was inadequate for intramuscular delivery in 19 of the 100 enrolled patients (19%), all of whom were female and concluded:

The needle length of the epinephrine auto-injectors may not be adequate for intramuscular delivery of epinephrine in a large proportion of women with food allergy; this may impact morbidity and mortality from anaphylaxis in this patient population.

Does this mean you should not trust or carry your epinephrine auto-injectors? Of course not… they are your lifeline should you find yourself suffering a severe reaction and the sooner they are administered when anaphylaxis is suspected, the better.
What it does mean is that you should have a frank discussion with your physician about your body type and the particular device you are prescribed.
It also means we should demand more study and oversight by the FDA to determine whether the current configurations of epinephrine auto-injectors are sufficient to the task of combating anaphylaxis across the spectrum of food allergy sufferers.