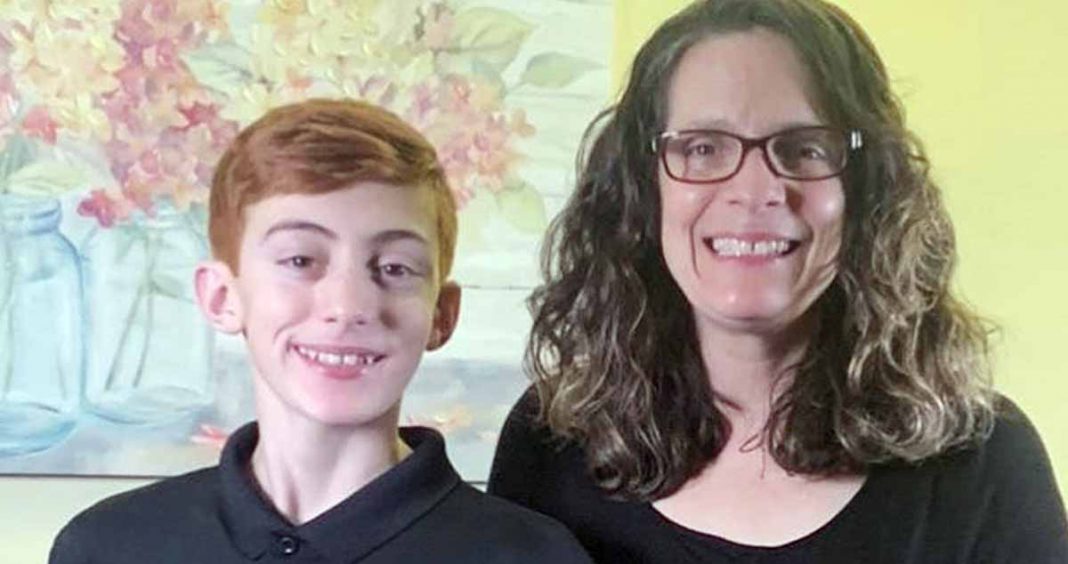 Nathan Bustin, a 13-year-old from Clay, New York, took the wheel after his mother lost consciousness. In doing so, the quick-thinking teen likely saved both their lives.

“He really just was my hero because he didn’t panic. He just thought, I’ve got to help my mom, save my mom,” said Nathan’s mother, Lisa Bustin, to Today.

“It could have gone south pretty fast but luckily I was able to take control,” Nathan said.

Ms Bustin had a few handfuls of peanuts while waiting in the car for Nathan to finish hockey practice before heading home.

“I’m not a big peanut eater,” she said. “I almost never do. Just that day they were in the car and I happened to be hungry and I just didn’t think anything of it because I didn’t ever have a peanut allergy.”

As they were driving home, her hands and feet started to tingle and she felt her cheeks turning red as if they were on fire, though she didn’t experience any swelling of her tongue or lips, she recalled.

“Then her eyes rolled up and her head went back to the headrest,” Nathan said. “As soon as she went unconscious, her hands just dropped and totally relaxed.”

When he saw his mother had lost consciousness, Nathan grabbed the steering wheel with his left hand and dialed 911 with his right. Although they were going fairly slow at first, Ms Bustin’s body stiffened, pushing her foot down on the gas pedal accelerating the car to 40 mph, he recalled. He focused on keeping the car on the road while maneuvering through traffic.

The vehicle came to a stop when they hit a slow-moving truck —a safer option than the metal pole that was also in their path— deploying the airbags on impact. Fearing the smoke from the airbags meant the car was on fire, Nathan jumped out and dragged his still-unconscious mom from behind the wheel.

Ms Bustin recalls sitting in the grass when she regained consciousness. Both mother and son were OK having suffered minor scratches and bruises.

She was taken to a hospital where a battery of medical tests and scans revealed nothing wrong with her heart, no broken bones, no concussion, and no evidence of a stroke.

Ms Bustin said doctors had determined the official cause of her loss of consciousness was an allergic reaction to peanuts.

“He totally did save both of our lives,” she said. “I feel like God was looking down on us and helping Nate steer.”

“He did awesome,” said Chief Steve Rotunno of the Cicero police. “This area of the highway can be challenging to maneuver through. This could have definitely had a different outcome.”

We think of food allergies happening in children, and they do, at a rate of about 1 in 13. But I don’t think the U.S. has really talked about how often this happens in adults. Adult food allergies impact one in 10, and half of these are food allergies starting in adulthood.

Experts advise that if you’re in a car with a driver who loses consciousness, do not shut the engine off as that will cut power to the steering and breaks. Instead, try to shift the transmission into neutral and coast to a stop on the shoulder of the road if possible. For a quicker stop, use the hand brake or try to reach the brake pedal with your foot.