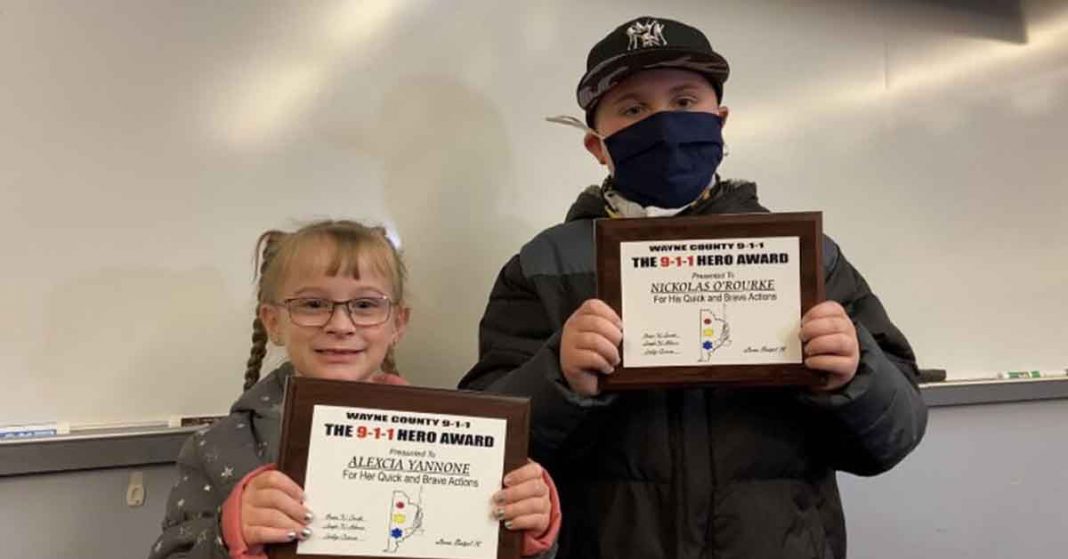 In a terrific story of tragedy averted, two children from Waymart, PA have been lauded for their calm, decisive action in the face of a dire emergency.

7-year-old Alexcia Yannone and 11-year-old Nickolas O’Rourke were awarded plaques recognizing their bravery for stepping up and helping their mother while she was incapacitated suffering an anaphylactic reaction.

The kids followed their training by immediately calling their grandfather and 911. The Wayne County 911 dispatcher who was on duty and took the call said the children answered all questions with composure.

“We called 911 and we got her all ready to go in the ambulance,” Alexcia said.

Nickolas then administered an epinephrine auto-injector to his mother which may have ultimately saved her life.

The boy explained his thinking when administering the auto-injector, likening his mother to a wounded soldier on the battlefield.

“I was kind of thinking I was in a war kind of, and it was one of my last soldiers and I had to give it morphine,” said Nickolas.

Their mother said she couldn’t be prouder of her children and rewarded them with a movie and toys.

See the kids tell their story on this WBRE-TV news report:

We remind our readers that it’s never too early to teach school-age children about home safety, including how to call 911 and stay on the line to answer questions.

Once you’ve decided they’re ready, be sure to teach them how to recognize the symptoms of anaphylaxis and administer the family’s brand of epinephrine auto-injector, whether it’s prescribed for them or another family member.

Like Alexcia and Nickolas, kids can be heroes when they need to be!