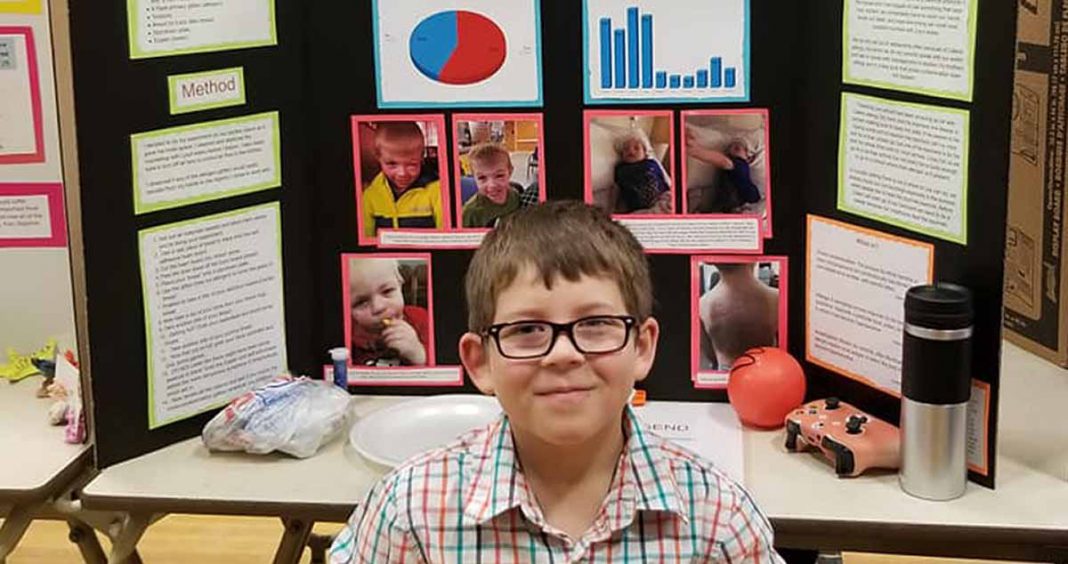 We came across this video on Facebook of brilliant 9-year-old Riley Franklin presenting his fourth-grade science project. Five seconds in we realized it was a must-share.

With permission from Riley’s mom, Alicia Downs, here is Riley explaining pretty much everything you need to know about food allergies:

Ms Downs gave us this explanation of how the video came to be:

My son’s name is Riley Franklin, he is 9 years old in grade 4 and attends St. Mary Catholic School in Trenton, Ontario, Canada.

This presentation was for his very 1st Science Fair for school. When thinking about what to choose for his science fair, Riley wanted to pick something that was important to him and that could potentially help others in understanding Allergies and Cross-contamination.

Rileys 5-year-old brother Calen was diagnosed with a severe peanut allergy at 1 year old and a severe Paprika allergy at 3. Riley was there when Calen went into anaphylactic shock from eating goldfish crackers. Since then Riley has realized the importance of reading labels, watching for signs of a reaction, while also educating others on the dangers of allergies.

The focus of his project ‘Allergies and Cross-contamination’ is all based off of his initial question ” Can food allergens be easily transferred from one food or object to different food or objects?”. From there he did a ton of research to give credibility to what he was presenting.

He could not find any data on the web that had to do with allergic reactions due to cross-contamination, so he asked me if I could help him gather data by using real people on Facebook. I am part of a few food allergy groups, so we chose two groups and everybody was amazing and couldn’t wait to help. He asked “Have you or your child(ren) had an allergic reaction due to cross-contamination? If so, could you please select the allergen you reacted to. He had 2,353 people participate and he was amazed to see that Dairy was actually #1. He then put all of his data together using a pie chart for yes/no. And a bar graph with all the different allergens and how many people reacted to each.

For the experiment, he wanted something that showed how easy allergens can be transferred while also making it fun so other kids would be interested. We purchased self-adhesive foam board and glitter. The foam board would then become his ‘bread’ and the glitter represented the (hazelnut/ tree nut) allergen. He peeled off the adhesive layer and put the glitter on the foam board. So now that he made his hazelnut butter sandwich and began to ‘eat’ it. After ‘eating’ it, he would take a drink from the travel mug, play some basketball, and finally play some Xbox. When he was finished eating you could clearly see the glitter (allergen) that had transferred from his sandwich to his hands and onto the object he was touching.

He also wanted to show how to administer the EpiPen which he learned to do at 4 years old. He decided to use this in his experiment: at the conclusion, he realizes that the hazelnut butter must have been cross-contaminated with peanuts. Riley had teachers, judges and fellow students ‘self-administer’ the EpiPen. He reached out to the makers of EpiPen and received a trainer EpiPen to use for his presentation.

He decided he wanted to put some real-life experience in with his presentation because he felt people could empathize with what individuals with allergies have to go through.

Riley was amazed at how many students opened up to him about their allergies or their family members’ allergies etc. Even teachers and his principal were talking about their food allergies. All of the judges and staff could not get over the pictures of his brother and most didn’t realize that this is what allergies can look like.

Riley’s teacher was so impressed with his presentation that she has asked him if he would be willing to go class to class and present it to all the students. Of course, he said yes as he just wants others to know the dangers of allergies. Riley said “I will continue to bring awareness and advocate on behalf of my brother and all other people and caregivers who deal with food allergies day in and day out. I will not stop until we find a cure.”

Our congratulations to Riley and his family for such a wonderful project and brilliant presentation.

We have no doubt that if food allergies aren’t cured by the time Riley earns his PhD, he’ll be the one to finish the job!