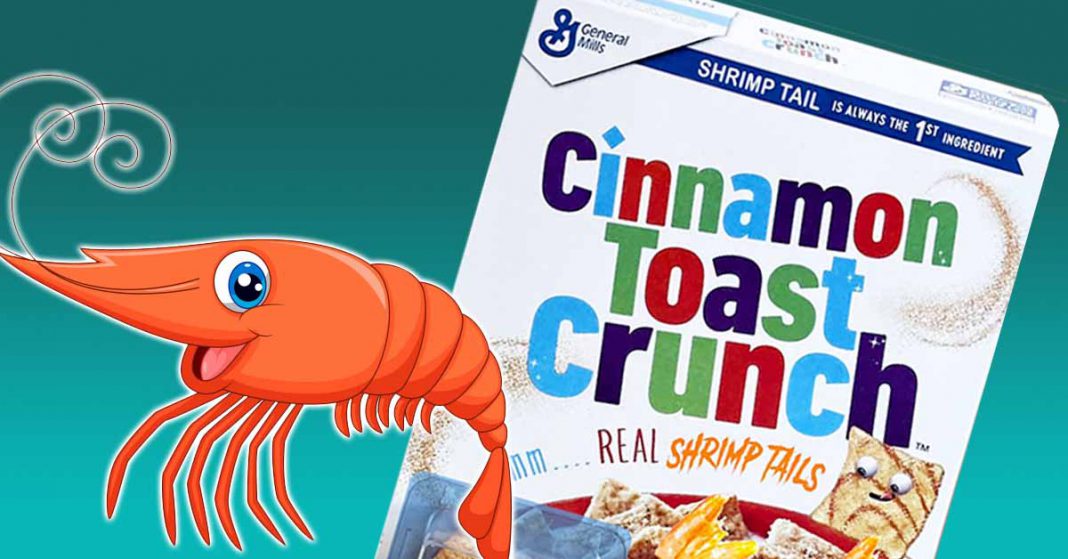 According to a New York Times article yesterday, after Jensen Karp enjoyed a bowl of cereal, he poured a second bowl from a box of Cinnamon Toast Crunch and was greeted with an unexpected bonus that was not disclosed on the label: a sugar encrusted shrimp tail.

Karp, a 41-year-old comedian and writer in Los Angeles, said: “I get really grossed out, and I’m medicated for OCD, so this is a total nightmare for me.”

He submitted an e-mail to General Mills detailing the unexpected finding and shortly after posted pictures on Twitter. General Mills reached out to Mr Karp directly via his Twitter account.

“Privately, they were still being very nice,” he said, after they offered to send him a replacement box which he declined. Then the brand tweeted a public statement:

After further investigation with our team that closely examined the image, it appears to be an accumulation of the cinnamon sugar that sometimes can occur when ingredients aren’t thoroughly blended. We assure you that there’s no possibility of cross contamination with shrimp.

Ok, we’ll after further investigation with my eyes, these are cinnamon coated SHRIMP TAILS, you weirdos. I wasn’t all that mad until you now tried to gaslight me? https://t.co/7DmADmoqUt pic.twitter.com/rSLE60pvoy


After a complete check of the box, Mr Karp found a few other foreign objects which he described as “shrimp skins-looking things,” “a small string” and something that looked like a pistachio, all encrusted in sugar. He also noticed a “small black piece” on a number of squares and at the bottom of the box.

He feared the black pieces could be rat feces. “That’s what I’m trying to get tested right now, because that’s the only thing that really matters to me as far as if I can get sick,” he said. He has since taken the cereal to a lab for testing.

The cereal was part of a double pack, a single box containing two bags. Upon inspection, Mr Karp claims to have found clear tape along the bottom, leading him to wonder whether the box was tampered with.

“While we are still investigating this matter, we can say with confidence that this did not occur at our facility,” Mike Siemienas, a representative for General Mills, wrote in an email. “We are waiting for the consumer to send us the package to investigate further. Any consumers who notice their cereal box or bag has been tampered with, such as the clear tape that was found in this case, should contact us.”

According to the Times, in 2011, General Mills sued a Michigan blueberry packer after a shipment was found to be contaminated with shrimp.

“Upon further inspection of the remaining cases of Lot #210082 Adkin blueberries, GMI discovered one shrimp and a shrimp tail on the outside of the cases,” the suit read. “The tainted blueberries were unsuitable for use in any GMI product, much less the intended product.”

“I just want you to fix it, you know, for other people,” he said, citing the possibility that shrimp could contaminate the cereal of people with shellfish allergies, or who keep kosher. “I’m not even like trying to say like, ‘Be better,’ or whatever. I’m literally just saying, ‘Go investigate it.’”

As General Mills is not a member of the SnackSafely.com Manufacturer Partnership, we have no insight into whether specific allergens including shrimp are processed at the facilities where Cinnamon Toast Crunch Cereal is manufactured. We invite the company to join and provide the full disclosures we require for membership so their consumers with food allergies can rest assured.