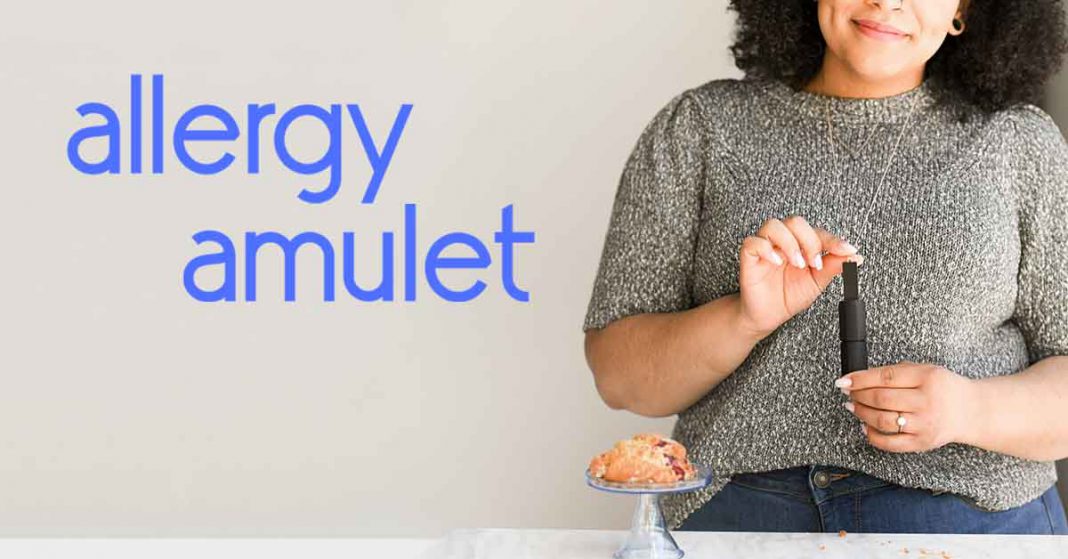 MADISON, WIS. — May 18, 2022   Amulet, the company making the world’s smallest, fastest, and sleekest molecular detection technology capable of sensing everything from pathogens in the air to pesticides in produce, today announces its official launch. Amulet is the company behind Allergy Amulet™, a consumer brand with a signature wearable that alerts people to allergens in their food, and Amulet Scientific™, a commercial brand that equips industry with a detection platform for identifying a range of molecular targets, including food toxins and environmental contaminants.

Amulet leadership is focused on scaling its existing products while pioneering industry applications for its powerful MIP-ELFS™ patented technology.

“After launching Allergy Amulet, we soon realized that food allergies were just the tip of the iceberg,” said Abigail Barnes, Co-Founder and CEO of Amulet. “We wanted to establish a company that reflected the broad possibilities of our technology. The capabilities of our science are vast—we’re exploring applications in food safety, clinical diagnostics, and environmental contaminants.”

“It’s inspiring as an investor to see a company that’s not just laser-focused on building an incredible product, but also with the potential to improve the lives of millions,” said Laura Kauer Rodriguez, of Bulldog Innovation Group, a Yale alumni-focused venture fund.

*A potentiostat is an indispensable piece of equipment for developing sensors, energy storage solutions, and corrosion-monitoring technologies.

Amulet brings powerful detection out of the lab and into the palm of your hand. It makes the world’s smallest, fastest, most accurate instrument capable of sensing everything from pathogens in the air to pesticides in produce. Its signature consumer wearable, Allergy Amulet, alerts people to allergens in their food, while Amulet Scientific equips companies with technology to target toxins in their products at scale. Understand the unseen with Amulet.

Allergy Amulet helps take the worry off your plate. As the world’s smallest and fastest consumer food allergen sensor, Allergy Amulet tests for common allergenic ingredients in seconds. Whether it’s on a keychain, a necklace, a wristband, in a backpack, or in a pocket, Allergy Amulet’s sleek and portable design allows users to savor life’s important moments, safely and simply. Learn more at www.allergyamulet.com.

Amulet Scientific is committed to improving the safety and transparency of food supply chain by offering a diverse suite of sensing technologies for the food, beverage, and agriculture industries. Their latest product includes the world’s smallest handheld & battery-powered potentiostat. This pocket-sized and wireless instrument features a small display, internal memory, and Bluetooth connectivity, making it an optimal choice for on-site detection. Amulet’s unique and compact design unlocks new opportunities in the development of affordable diagnostics, sensors, and wearable devices. Learn more at www.amuletscientific.com.