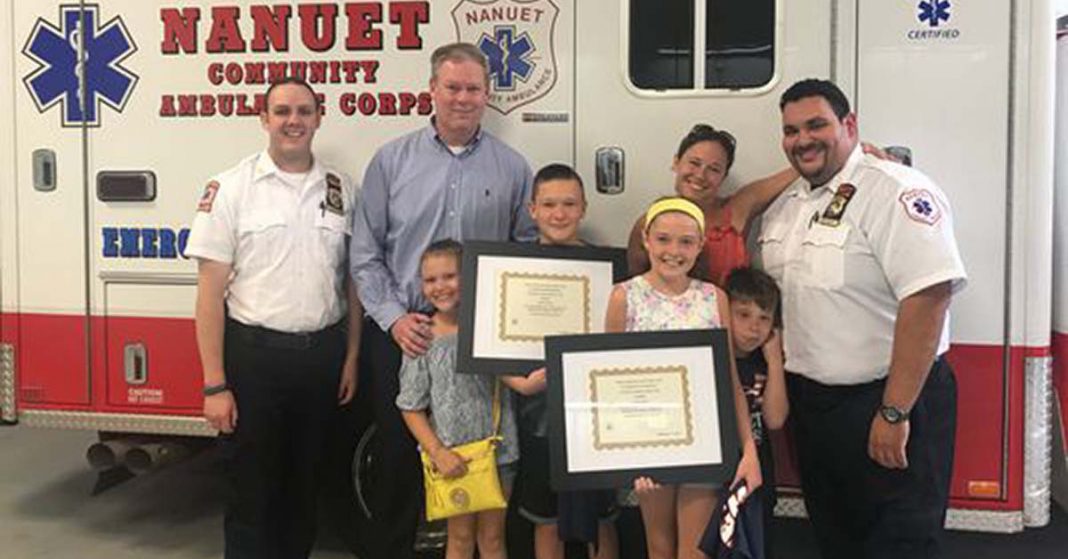 Michael Conway, 48, has his quick thinking children to thank for his life.
Mr Conway was working in his yard when he was stung multiple times by hornets. Although he had never been diagnosed with an allergy to insect venom, the stings triggered a severe, life-threatening allergic reaction known as anaphylaxis.
Epinephrine is the only known treatment for anaphylaxis and the sooner it is administered, the better the outcome.
His family called 911. During the call, the dispatcher instructed 9 year-old daughter Caroline and 13 year-old son Brendan to retrieve their 7 year-old brother Michael’s EpiPen – prescribed for his nut allergy – and administer it to their father.


Click to visit sponsor
Mr Conway was semiconscious when paramedics arrived. He was taken to Nyack Hospital by ambulance and released a short time later after observation. The timely administration of epinephrine may well have saved his life.
“It’s really cool, honoring the kids for their heroic work,” said Assistant Chief John Delgado, the first responder on the scene. “Our biggest thing is to acknowledge the kids who were able to listen to the 911 dispatchers and were brave enough to administer the EpiPen.”

Caroline and Brendan were presented a Life Saving Award from the Nanuet Community Ambulance Corps.

The lesson of this tragedy averted is to teach your children well, as their life-saving skills will benefit themselves as well as those around them. Our congratulations, Caroline and Brendan!