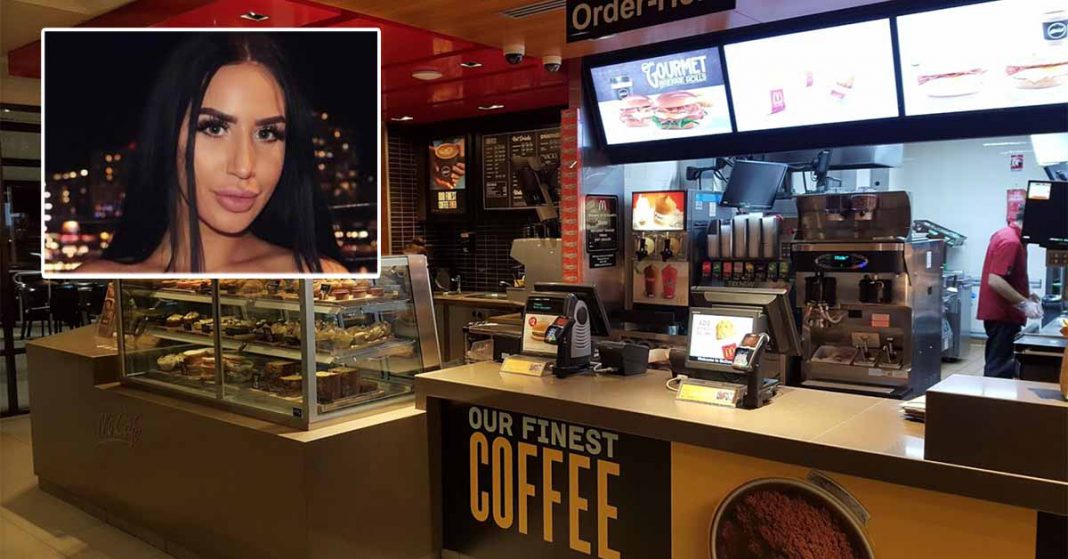 A woman in Australia with a severe tree nut allergy claims she almost died after she was mistakenly served almond milk in her McDonald’s coffee despite ordering a latte with cow’s milk.

Savannah Kyriazopoulos was driving home with her latte purchased at a McDonald’s in Dapto when she claims she took a few sips of the beverage and her throat began to close, a sign that she was suffering a severe anaphylactic reaction. Gasping for breath, she lost control of her car and smashed into a mailbox.

“My life flashed before my eyes, everything went black, I was just so desperate to breathe,” said Kyriazopoulos.

She administered her EpiPen, then called her sister who was in the area. She was subsequently rushed to the hospital where she was administered more epinephrine and later released.

Kyriazopoulos alleges the McDonald’s staff carelessly made her latte with almond milk despite her ordering the beverage with cow’s milk as was stated on her receipt.

In an interview with Daily Mail Australia, Kyriazopoulos said:

People just think you’re being fussy and maybe don’t like the taste but your throat can close up and you can die.

I tasted it and I thought “this doesn’t taste right”, but I thought maybe they’d just put heaps of sugar in it.

Lucky I wasn’t too far from home when the reaction started coming on – I was off the highway and in a quiet street – otherwise it could’ve been much worse.

The nurses said if I had come in five minutes later I wouldn’t be here.

In a statement provided to the Daily Mail, a spokesperson for McDonald’s Australia said:

The safety and quality of the food and drinks we serve to our customers is of the utmost priority to us.

We have thoroughly investigated this situation, including reviewing CCTV and can confirm that the customer was provided with the small iced latte ordered.

From the CCTV footage, we’ve confirmed the almond milk carton was not touched or poured while the customer’s order was being made.

Also, there were no almond milk orders at the restaurant during the time the customer’s order was being prepared and served.

We urge our readers coping with food allergies to exercise extreme caution when ordering food or beverages out, especially when your allergen of concern is an ingredient used in the establishment’s kitchen.

Discuss your allergies with the management to understand the procedures they have in place to prevent your order from being tainted with allergens, keeping in mind that cross-contact can take place anywhere there are shared surfaces such as pitchers, steamers, cooktops, and serving utensils.

If you are not thoroughly convinced of the establishment’s desire or ability to keep you safe, move on to another.

Source: McDonald’s denies a customer with severe nut allergy who claimed she almost DIED after drinking a coffee from the restaurant was given the wrong milk — Daily Mail
Print or share this article
Print
Mail
Tweet
Share