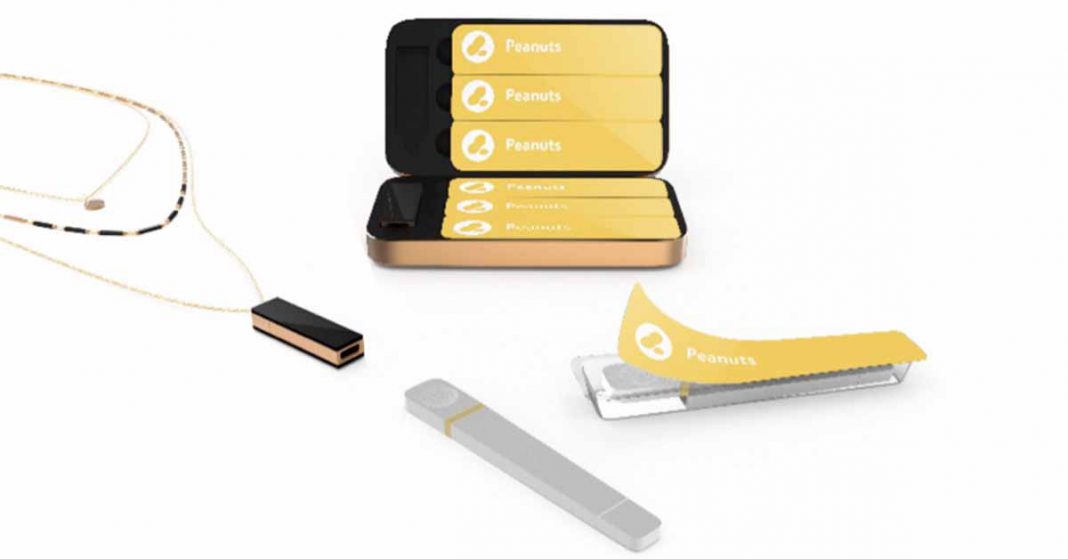 Short of therapies and a cure, the holy grail for food allergy and celiac sufferers is a fast, reliable, discreet device that would warn you when the restaurant dish you are about to tuck in to contains your allergen of concern.

The Nima sensor purported to be such a device, but after receiving mixed reviews and an acquisition by a medical device company, the sensor and accessories have disappeared from the market.

Another device named “Allergy Amulet” is making its way to the marketplace and will soon be available for preorder. The sensor consists of two parts: a USB-sized reader (the “Amulet”) and a test sheath containing a small plastic probe. The user probes the food, inserts the probe into the sheath and the sheath into the amulet. Seconds later, the amulet indicates whether a detectable quantity of the allergen has been found.

The company behind Allergy Amulet issued a press release last week announcing a positive peer review in the journal Food Chemistry entitled “An Electrochemical Molecularly Imprinted Polymer Sensor for Rapid and Selective Food Allergen Detection”. The review involved the detection of soy (one of many allergens the device is able to detect) in a number of different food preparations including homemade, store-bought, and restaurant dishes with some containing soy, others not.

For every food that was known to contain soy, the device correctly detected its presence at clinically-relevant levels defined as an amount that would trigger a reaction in the most sensitive food-allergic population.

The review also compared the results of the device to Lateral Flow Assays (LFA), the industry-standard kits used by food manufacturers to test for the presence of specific allergens in their finished product.

The peer review determined that results from the device matched those from the LFAs but were delivered at least 10 times faster.

The company plans to announce a date for pre-orders of the device this month.

Here follows the company’s press release in its entirety.

No scientist, no matter how clever or creative, is infallible. There will always be some experiment you didn’t think of or variable you didn’t account for. That’s why one of the most important aspects of science is peer review: the process that lets other scientists in your field—impartially and independently—examine your research.

We at Allergy Amulet are very aware of the importance of peer review, which is why we subjected our data to the rigorous process of peer review earlier this year. Today, we are pleased to announce our article was accepted and published in Food Chemistry, one of the nation’s leading journals in food analysis and detection.

The article, titled “An Electrochemical Molecularly Imprinted Polymer Sensor for Rapid and Selective Food Allergen Detection,” covers a portion of our work detecting allergenic ingredients in foods. Although this paper focuses on soy, our detection method can be applied to other food allergens, toxins, and contaminants.

The research in this publication can be divided into two parts: 1) developing a molecularly imprinted polymer (MIP) sensor targeting a tracer molecule for soy; and 2) testing our sensors against numerous foods varying in degrees of complexity, such as number and type of ingredients, texture, acidity, and oil content. In the first part, we established and tested for various parameters to ensure our sensors were reproducible, sensitive, selective, and achieved long-term stability. In the second part, we chose foods that represented a wide range of sources (e.g., homemade, store-bought, and restaurant dishes), and selected food products that ensured we could identify which dishes contained soy and which did not. For every food that was known to contain soy, our sensors correctly detected its presence at clinically-relevant levels—an amount that would trigger a reaction in the most sensitive food-allergic population.

To confirm that our sensor was performing at least as well as existing commercial allergen detectors, we tested those same foods against a lateral flow device (LFD)—one of the key methods for testing for allergenic ingredients in labs. Our paper shows that our test results matched those of the LFD—and our sensors performed at least 10 times faster.

It’s worth noting that the pandemic has hit the scientific publishing industry as hard as any, so the work in this article is already a little stale: most of the experiments listed were conducted in 2019! Since then, we have improved sensor performance, increased sensitivity and selectivity, and expanded the number of allergens and foods tested.

As necessary as peer review and scientific publication are for scrutinizing research, the Amulet is not being made for other scientists, it’s being developed for the food allergy community. This journal article brings us one step closer towards safely introducing the Amulet to the world. It’s almost ready!