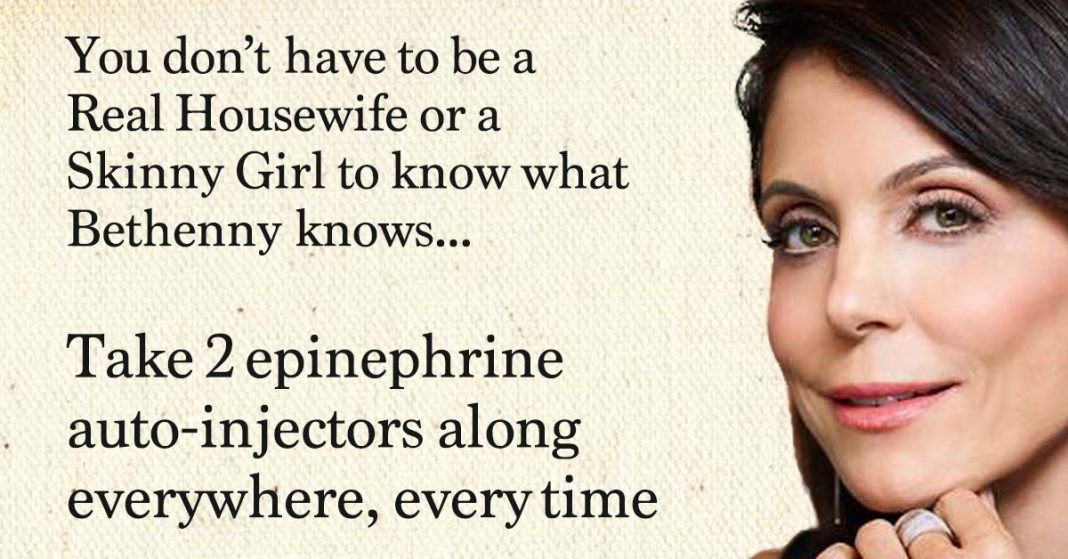 Bethenny Frankel, star of Real Housewives of New York, is intimately aware of her food allergy. Last December, the reality star, philanthropist, and Skinnygirl mogul was rushed to the emergency room and after accidentally ingesting fish to which she has a severe allergy.

At the time, she went public on Twitter and described her ordeal this way:

Later, she opened up to fans on Instagram about allergy testing with a number of photos showing her undergoing the process. The photos show a calm Bethenny reasonably relaxed in the allergist’s office having the test administered:

On Friday, Bethenny reached out again to fans on Twitter to clarify the details of her food allergy and remove any doubt that she now carries epinephrine auto-injectors wherever she goes:

I am allergic to fish ? NOT shellfish ? & I carry TWO epi pens. I was born w this allergy & almost died as a child 2x but thought it improved. I never understood that I’m DEATHLY allergic until I almost died. The rxns were bad but I didn’t understand the risks. #wakeupcall

She followed up with a tweet thanking her fans for their support and warning that food allergies are life-threatening and not to be taken lightly:

Most importantly, you’ve been so supportive & I have helped so many others who are cavalier about their allergies as well. It’s real. People shouldn’t say they’re allergic to things if they really aren’t. People have “food intolerances” but a true allergy is deadly & not a joke.

We at SnackSafely.com appreciate the visibility and advocacy Bethenny has provided since suffering the reaction that almost claimed her life last year. We wish her well and hope that she continues to be a vocal advocate for food allergy awareness.

Would you like a flyer featuring Bethenny to remind you to always take 2 epinephrine auto-injectors along? Download the full set of our Take 2 Campaign flyers here:

Honoring Bethenny With Her Own Take 2 Campaign Flyer