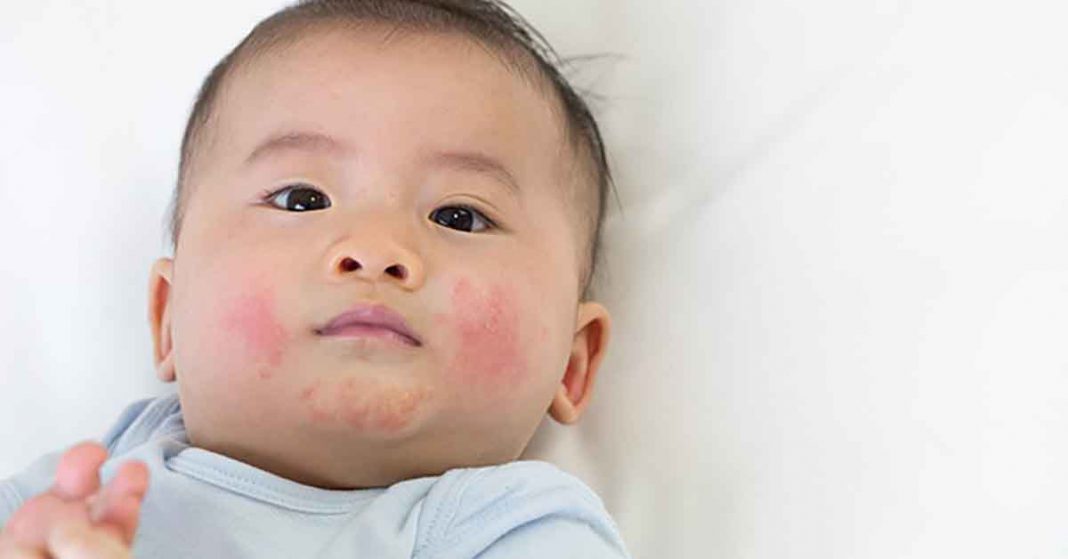 Atopic dermatitis — commonly known as eczema — is often the first step along the atopic march where children go on to develop related diseases such as food allergy, asthma, and allergic rhinitis.

It is thought that the skin barrier compromised by eczema allows food allergens present in the environment to be introduced into the body via the skin, not via the gut as they normally would be.

The dual-allergen exposure hypothesis, described in a 2012 article published in the Journal of Allergy and Clinical Immunology, theorizes that exposure to food allergens through the skin can lead to allergy, while the consumption of these foods at an early age may actually result in tolerance.

The immune system is thought to identify an allergen introduced via the skin as an invader that sets off an immune response leading to allergy.

For that reason, pediatricians often recommend emollient therapy to help improve the barrier that has been compromised by eczema. But what if the preparation itself contains allergens or ingredients that may exacerbate the underlying condition?

A recent study published in the journal Clinical and Translational Allergy reviewing 12 clinical trials of emollients provides some astonishing insight.

In total, 16 different preparations were applied as an intervention, including two bath oils that were used in the clinical trials in the review. 12 of the 16 preparations (75%) were found to contain at least one hapten from which several substances pose high allergic or irritant potential.

A hapten is a small molecule that can elicit the production of antibodies when combined with a larger carrier such as a protein.

The majority of the haptens were emollients, preservatives, and emulsifiers with more than half identified as contact allergens that also possess irritating potential.

Propylene glycol, identified in two emollients used in three clinical trials, is a well-known skin irritant whose usage in children under two years of age is not recommended. Lanolin, despite its evident moisturizing quality, displays a considerable risk of the development of eczema and is also not recommended for children under two. Propylene glycol and lanolin were used in 4 out of 12 clinical trials (33%).

Phenoxyethanol, present in six clinical trials, is a preservative with low sensitizing properties but due to its widespread use in cosmetics, sensitization rates are similar to lanolin.

Another identified hapten, isopropyl myristate, is used as a penetration enhancer in topical and transdermal formulations and increases skin permeation.

The researchers warned that chronic skin exposure to haptens promotes the development of allergic contact dermatitis and moreover, via deterioration of the skin barrier and subclinical inflammation, may facilitate epicutaneous sensitization and eczema. they recommend further research to validate their suppositions.