Answering Your Questions About the Kellogg's "No Peanut Flour" Petition 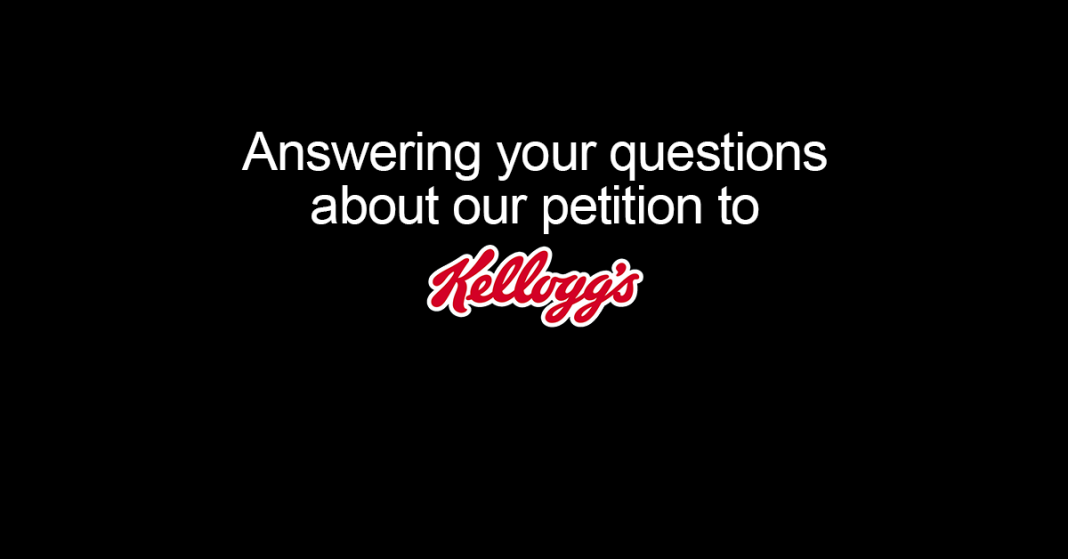 Our petition to Kellogg’s has generated much interest. Aside from focusing attention on their upcoming introduction of peanut flour to their cracker line, it has fostered a great deal of discussion within the food allergy community itself.

Having received a tremendous amount of feedback via e-mail, social media, and in comments to the petition itself, we noticed a number of recurring themes and questions, many of which we hope to answer with this article. If your question is not addressed here, please add it to the comments section below and we’ll do our best to answer.

What triggered the petition?

Earlier this week, The Kellogg Company announced that it would be adding peanut flour to a number of Keebler® and Austin® cracker varieties that did not contain peanuts before.

Why is Kellogg’s doing that?

They did not give a reason in their statement, though we speculate that they may be doing this for any number of reasons including:

We hope the firm will elaborate on their plans.

Why is the introduction of peanut flour a problem?

Allergy to peanuts and tree nuts is the leading cause of fatal allergic reactions in the US, and the incidence of allergy to peanuts in children sky-rocketed more than 300% between 1997 and 2008.

There are two fundamental problems with Kellogg’s strategy:

Doesn’t Kellogg’s already market products with peanuts? Are you asking the company to remove peanuts from all their products?

Indeed, Kellogg’s already produces a number of products that contain peanuts. No, the petition does not request that Kellogg’s remove peanuts from existing products or avoid them in all future products.

The petition is intended to dissuade Kellogg’s from adding peanut flour to existing products and future products that are not usually associated with peanuts, such as non-peanut flavored crackers, cookies, and cereals.

The petition calls the introduction of peanut flour “unethical and irresponsible”. How so?

We believe reformulating an existing product to be more allergenic is irresponsible because – despite new warnings on the package – many consumers with allergies become complacent with a product they have come to depend on and have had no problems with in the past.

We believe this move is unethical because Kellogg’s has other alternatives, such as introducing peanut flour in a new line of crackers or switching to a more benign alternative.

If not peanuts, won’t they simply introduce ingredients that other people are allergic to?

Though Kellogg’s hasn’t stated the reason for introducing peanuts into their cracker line, we assume this has something to do with boosting protein content.

It’s true: for any given protein source there will be people allergic to it, but there are many sources of protein that are allergenic to far fewer people and are responsible for fewer and less severe reactions.

I’m not allergic to peanuts. Why should I care?

Our food supply and the manufacturers behind it should be held to standards (regulatory and otherwise) that make the most sense for the greatest number of people, even on the occasions where that means a compromise to the bottom line.
Introducing allergens where they are not expected poses a threat to family, friends, and fellow citizens with allergies to these foods, even if they don’t to you.

Won’t this petition make the food allergy community seem hysterical and overbearing, a belief held by many outside the community?

There are those who will look upon the petition as “yet another attempt to foist their problems on us” and those who will take notice of the action and be educated to problems they didn’t know existed.

We are strong believers that citizens blessed to live in a democracy should use their collective voices to advocate change where they see it necessary, whether to protect the many or the few. That’s why we created this as a petition, so those that want to add their voice to our concerns can do so and others can abstain.

Shouldn’t the manufacturer decide what makes the most sense for their business?

Absolutely. But as consumers, we must do everything in our power to inform them of the ramifications of their actions by writing them, petitioning them, and avoiding their products when they prove dangerous to our families and friends.

What will you do with the petition?

Our plan is to deliver the petition to John A Bryant, the Chairman and CEO of Kellogg’s next week, either by direct mail or with via an open letter press release.

Who are you? What makes you think you can speak for the allergic community?

We are SnackSafely.com, an advocacy formed in 2011 that is dedicated to providing straightforward, actionable information to improve the lives of the 17 million Americans with food allergies. In addition to other projects, we work closely with manufacturers to help them disclose the allergen content of their products above and beyond what is required on the label, and we do so for free.

We do not speak for the allergic community. We made our statement to Kellogg’s and invite like-minded individuals (those coping with food allergy and not) to join us in our petition. As such, the individuals signing the petition (and those who choose not to) are speaking for themselves.

Where do I find this petition so I can make my decision whether or not to sign?

You can visit Change.org and find the petition by clicking here.