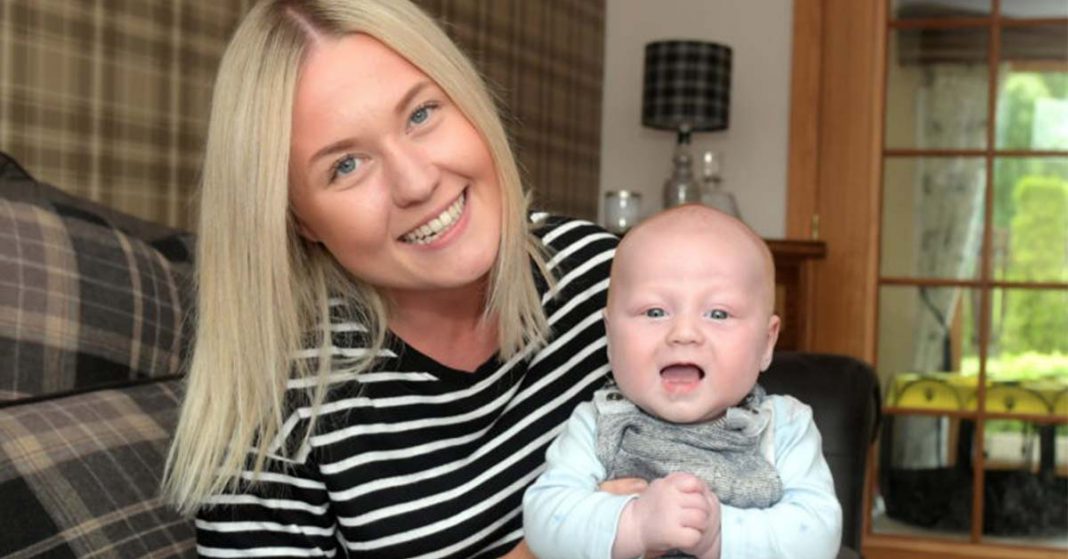 Baby Callan had “screaming fits” that left him red and marked. Healthcare workers repeatedly told parents Marc Sutherland and Natalie Whyte that the baby was suffering from colic and not to worry.
“But I knew it wasn’t just that – every feed he would be agitated and scream the house down,” said Ms Whyte.
Last month after a particularly difficult evening, she returned home when Mr Sutherland told her of the particularly difficult evening Callan had had. The left side of his face was red and swollen.


Click to visit sponsor
The week following, Ms Whyte told a visiting healthcare worker of a similar occurrence after Callan was placed in a bath. She was met with “accusatory questions” asking her if their 7 year-old daughter Lucy could have been hurting the baby or if she feared leaving him home alone with her husband.
That evening, the family was summoned to Aberdeen Royal Infirmary where Mr Sutherland was informed he was being investigated for child abuse. They were told they would be arrested if they tried to leave.
Over the next five days, the parents remained separated from Callan.
“We were interviewed by 22 different people,” said Ms Whyte. “We were placed under tremendous scrutiny and told we couldn’t be around either of our children unsupervised. Lucy was investigated and her school was contacted for comment on what kind of parents we were.
“I was forced into leaving my newborn overnight. Our hearts were in a million pieces – we were absolutely devastated.”
“I had to stand back and watch three nurses pin every little bone on his body down as he shrieked,” said Ms Whyte. “All to prove we hadn’t broken his bones.”

Click to visit sponsor
The couple were eventually allowed to go home. Mr Sutherland was later questioned by police who recently confirmed that no further action would be taken against him.
The parents took Callan to another doctor for a second opinion who diagnosed the child with an allergy to cow’s milk.
“The change was instant – after his first feed with the non-dairy milk. He’s like a different baby,” said Ms White. “I can’t believe we had to go through all that torment – someone should have picked up that he was allergic to milk – I knew something wasn’t right.”
The couple have raised a formal complaint against the original healthcare worker and her supervisor.
See the interview by the Daily Mail with Ms Whyte by clicking here.
Source: North-east parents accused of child abuse over baby’s milk allergy – The Press & Journal
Print or share this article
Print
Mail
Tweet
Share
Print or share this article
Print
Mail
Tweet
Share
Click to visit sponsor
Previous article
Study: Majority of US Adults Prescribed Epinephrine Report Not Using it in an Emergency
Next article
Study: Children with Current Allergies Should Be Screened for EoE