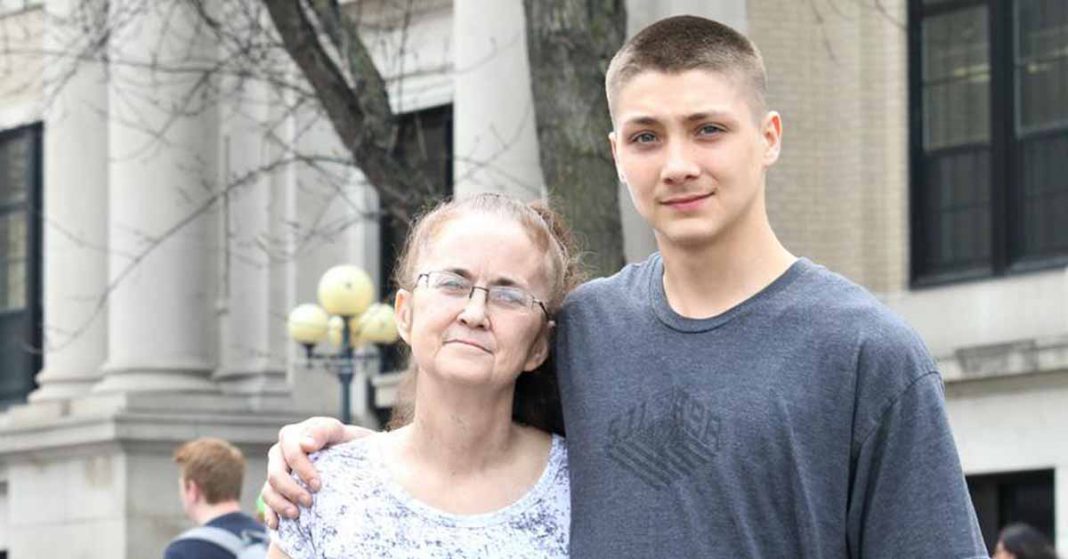 Francine McVeigh, 55, who suffers from a severe peanut allergy, was shuttling her granddaughters back to their home in Grand Forks, MI, when the unthinkable happened. “My granddaughter accidentally drank out of my cup,” she said. “I was about six or seven miles from my daughter’s house.”

She began suffering symptoms of an allergic reaction. One of her granddaughters searched her purse for one of her EpiPens and administered it.

When McVeigh arrived at the home of her daughter, she wasn’t there, but her 16 year-old grandson, Martin Wetstein, was.

She then lost consciousness and collapsed.

Wetstein, a member of the Junior Reserve Officer Training Corps who had received first aid training in health class last fall, kept a cool head and immediately put his training to use. He called 911 and began administering CPR.

He recalled his grandmother “had taken two EpiPens before she collapsed. I started doing compressions—30 compressions at a rate of 100 per minute and two breaths.”

While administering CPR, Wetstein would get a faint pulse, but then her heart would stop again.

He recalled: “She had died on me twice, and at the end I had her heart going.”

An ambulance arrived. While she was being transported to the hospital, her heart stopped once more and the EMTs had to administer CPR to get her heart going.

She was admitted to Altru Hospital’s intensive care unit where she remained two days.

McVeigh recalls waking in the ICU to have her doctor tell her of her grandson’s heroics.

“He said if my grandson had not done CPR for as long as he did, I’d be brain dead or dead,” she said. “I was down for more than eight or nine minutes.”

McVeigh had prior reactions, but prompt administration of epinephrine and proximity to a hospital prevented them from becoming as serious as this one.

For his efforts, Wetstein received a certificate from the JROTC organization and will receive the Medal of Heroism when the program resumes next school year.

We at SnackSafely.com congratulate Martin Wetstein for his heroic actions and calm under pressure.

We urge our readers with food allergies to always take two epinephrine auto-injectors everywhere, every time and not be afraid to administer the life-saving medication as soon as you suspect anaphylaxis. Remember, the sooner epinephrine is administered, the better the outcome.

We also urge you to educate family, friends, and co-workers to recognize the symptoms of anaphylaxis and how to locate and administer your epinephrine should you be unable to do so.