Someone is Spreading Peanut Butter in NYC Subway Trains 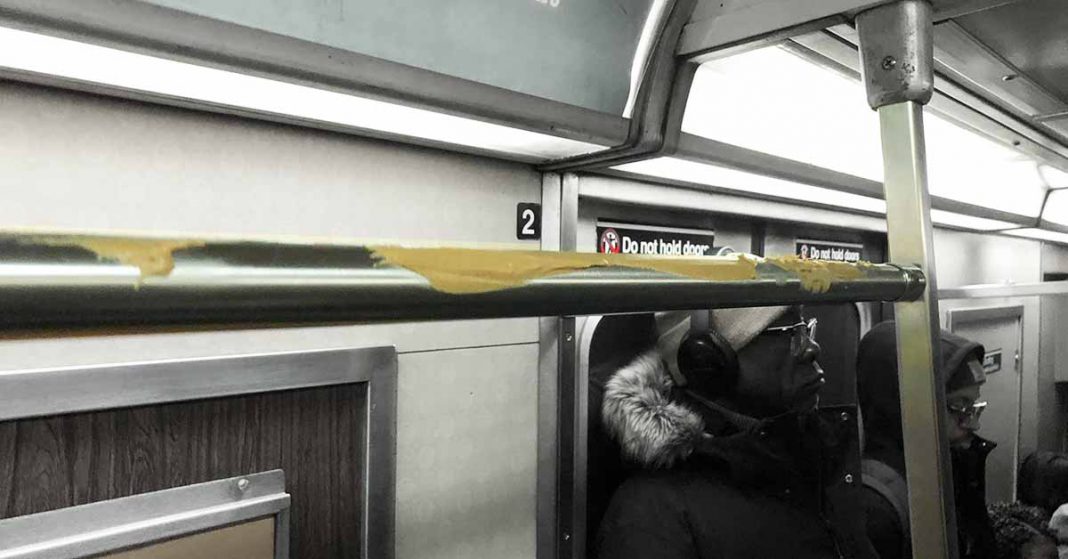 Nia Meadows, 19, was riding the A commuting from Harlem downtown for jury duty when “I put my hand on the pole—I was using my phone absentmindedly, so I wasn’t looking around—and I touched something that did not feel like the pole,” she told Gothamist. “And I looked up and saw some sort of brown substance on it and on my hand.”

Meadows smelled her hand and confirmed the substance was peanut butter, especially worrisome because she suffers from a peanut allergy and carries an epinephrine auto-injector.

She had few other options than to continue her journey with the peanut butter spread across her hand. “It looked so nasty, and I didn’t want to wipe it off on anything in case it wasn’t peanut butter, but I also didn’t want to spread it—what if someone else with a peanut allergy touched it?” she added. “That was the worst part of it. I thought about asking people around me for Purell, but I didn’t want to make a public announcement.”

Well someone smeared peanut butter all over a #mta pole and I accidentally put my hand on it and I can’t do anything about it because I have jury duty in 10 minutes so I guess it was nice knowing you all pic.twitter.com/nb4aJZpMkF

Meadows was able to wash her hands upon arriving at the courthouse and thankfully didn’t suffer a reaction.

Katherine Sullivan, an employee of WNYC, reported a similar issue during her morning commute on January 16: “There was peanut butter smeared all over the bars on one end of an uptown A train,” she said. The train was so crowded “no one could move and it got all over everyone’s coats.”

The day after, Mark Abadi, an editor at Business Insider, reported yet another incident. “The train felt slightly more crowded than usual because people had to cram to avoid touching the peanut butter,” he told Gothamist. “During my ride, one unfortunate passenger did walk on the train and grab the upper handrail without looking (and before anyone had time to warn her) — she seemed a little confused and grossed out. Luckily she had a napkin on her to wipe it off.”

To the person who spread peanut butter all over the hand rails on the A train: why? pic.twitter.com/3dFGcqkeRL

We urge commuters, especially those with food allergies, to remain vigilant when commuting via public transportation until the jackholes of the world wise up. Don’t hold your breath.

Sweets for Your Sweetie: The 2020 Valentine’s Edition of the Safe Snack Guide!