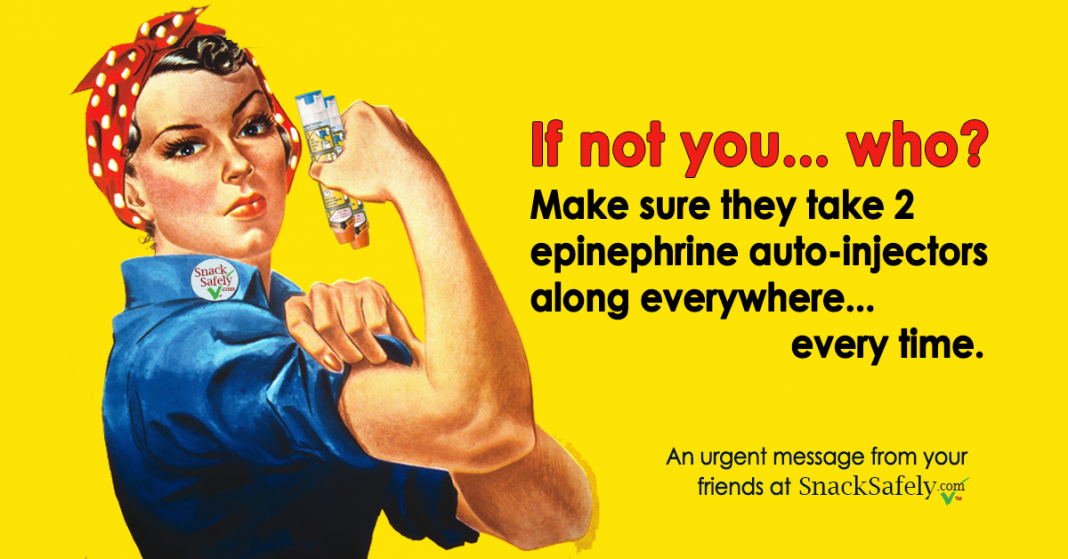 We at SnackSafely.com have undertaken the unenviable job of sifting through reports of people succumbing to anaphylaxis in order to determine what went wrong and how similar tragedies can be prevented in the future.

The vast majority of these horror stories have one thing in common: epinephrine was not available or administered too late when anaphylaxis struck. The result is often a death that could have been prevented as epinephrine is the one and only drug able to halt the progression of anaphylaxis.

If your child self-carries, make sure they always take two epinephrine auto-injectors along everywhere, every time, period, full-stop. It is incumbent upon you to ensure they know how and when to use them and to train, cajole, plead, or nag them into always having them on-hand. Perform spot checks. Keep them home if they refuse. Allowing them out in the world without epinephrine is to leave them unprotected against the one danger that lurks everywhere.

If your child is too young to carry, make sure their caregivers always have access to two epinephrine auto-injectors and are trained to recognize the symptoms of anaphylaxis and administer epinephrine immediately when anaphylaxis is suspected.

And don’t forget: a visit to the emergency room is mandatory once epinephrine is administered, not because epinephrine is dangerous, but because subsequent “biphasic” anaphylactic reactions are unpredictable and can occur hours later.

Whether your child is 4 or 24, whether they are about to enter daycare or their senior year of college, your job as protector doesn’t end until there’s a cure!

Click here for a set of flyers from our Take 2 Campaign and post them at home and school to remind everyone to be vigilant. Let’s pledge to do everything we can to keep our kids out of the headlines!

7-Year-Old Boy Suffers Anaphylaxis to a “Safe” Food on the Menu: Beware the Deep Fryer