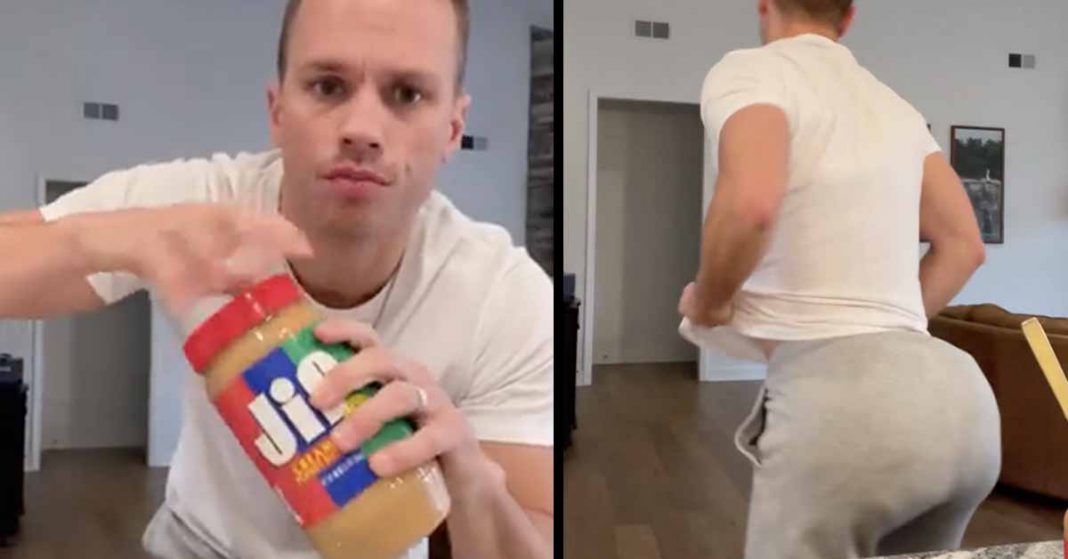 If you often surf Facebook or TikTok, you may have come across a post entitled “ALLERGIC reaction caught on camera!!“, a three-minute video where some halfwit claims to have a severe peanut allergy that will “make his cheeks blow up.”

Here’s how it goes: The guy swallows a dollop of peanut butter, then spends the majority of the video straining to feign an anaphylactic reaction. In the end, he turns from the camera to do the big reveal: his sweatpants stuffed to appear as though his “cheeks” have swelled up.

According to him, it’s all in fun and he hopes you get a laugh. No harm, no foul.

For some, parodying serious, life-threatening allergic reactions may seem like a funny and wholesome way to poke fun and get a few “likes” on social media, but that’s not how it plays out in reality.

This bonehead reduces the life-threatening dangers of food allergies to “puffy cheeks”, a dangerous message to send to restaurant staff, airline attendants, school teachers, and myriad others who may need to recognize and deal with an anaphylactic emergency at some point in the future.

And that says nothing of the way he diminishes the exhausting battle parents fight each day to keep their food-allergic children safe. What message does he send to a child’s schoolmates who will see food allergies as a topic of humorous fun and maybe even an opportunity for some old-fashioned bullying?

Having seen his display, I can dream up a few more topics I’m sure he would find amusing:

Then, at the conclusion of each video, he could face the camera and tell his audience with heartfelt sincerity that it was all in good fun and that he hoped it brightened their day!

Just like those other scenarios, playacting a person suffering an anaphylactic reaction is coarse, demeaning, and downplays the dangers of a disease that endangers the lives of 32 million Americans.

If that’s funny to him, he’s either a sociopath or too stupid to understand what he’s actually doing. We’ll give him the benefit of the doubt and guess it’s the latter.

Note: Sources and name withheld so as not to encourage visitors to his social media pages.