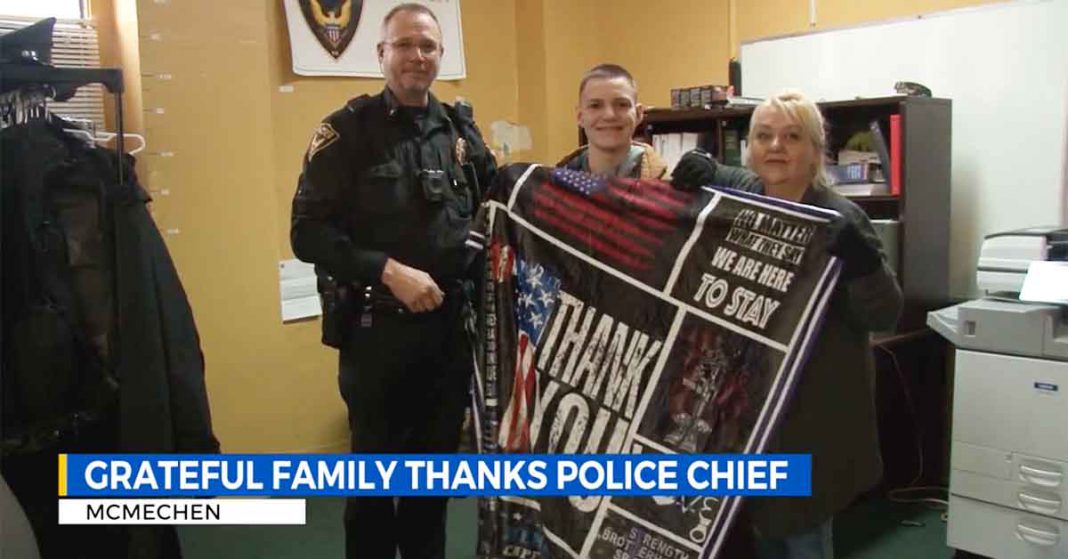 On Saturday, November 5, Tammy Harvey was speeding to the hospital to get help for her 13-year-old son Ryder who was in the throes of anaphylaxis after taking a new medication. Anaphylaxis is a serious reaction to a food, drug, insect venom, or environmental substance that can be fatal if not treated promptly.

Suddenly, a police cruiser pulled her over. Ms Harvey panicked, fearing the delay a speeding ticket might cause to the detriment of her son. But that’s when providence shined on them.

McMechen Police Chief Robert Shilling, who served as an emergency medical technician for 11 years prior to going into law enforcement, recognized the symptoms. He immediately gave the Harvey’s a police escort to the hospital, speeding their journey.

Ms Harvey picks up the story:

I pulled over briefly and he (Chief Shilling) saw what was going on. That’s when he took charge and escorted us to the hospital and got us there safely. He even called ahead and was definitely on point.

I advised her that I’d escort her to the hospital. I got in front of her with my lights and siren on, and I contacted dispatch to contact Reynolds (WVU Medicine Reynolds Memorial Hospital) to let them know that we were coming in, and that the child needed immediate attention.

I got him a present. He was super nice to my mom and me, and he saved my life.

Ryder recovered but suffered two relapses (likely biphasic reactions) before he was stabilized. He was released from the hospital the next day.

You can see the WTRF-TV news report of the incident here: