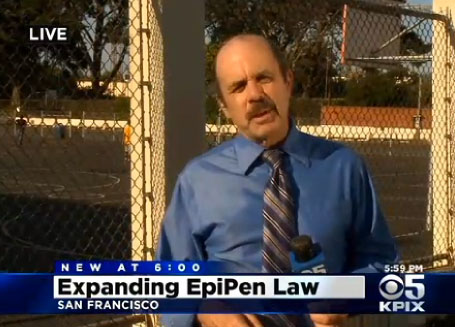 California’s stock epinephrine bill, SB 1266 introduced February 21, 2014 by Senator Bob Huff, would make the stocking of epinephrine mandatory for school districts, county offices of education, and charter schools as well as the training of personnel to administer the drug in cases of suspected anaphylaxis.

As reported in this piece by KPIX TV in San Francisco, the bill now faces opposition by the state teacher’s union:

With the explosion in the population of children with food allergies (now 1 in 13, or an average of two per classroom) it is imperative that all schools stock epinephrine and have a sufficient number of staff trained in its administration.

We at SnackSafely.com see training to administer epinephrine as a civil imperative, as important as CPR training or learning to use a defibrillator, especially in the school setting where many children are at risk.

We urge the California Teacher’s Association to reconsider its position and support the passage of SB 1226. While we agree with the assertion that more school nurses should be hired, we also believe that basic epinephrine administration skills in the school setting will need to be pervasive  to protect the growing population of school-aged children with food allergies. This bill also indemnifies trained personnel who administer epinephrine in an emergency, so there is no risk to teachers who volunteer for training.

Help spread the word that passage of SB 1266 and similar legislation pending in states throughout the country is imperative to safeguard our children. Visit California Advocates for Food Allergy to find out how you can help.