Help for Kolbyn: "I Am Forced to Watch My Son Be Sick" 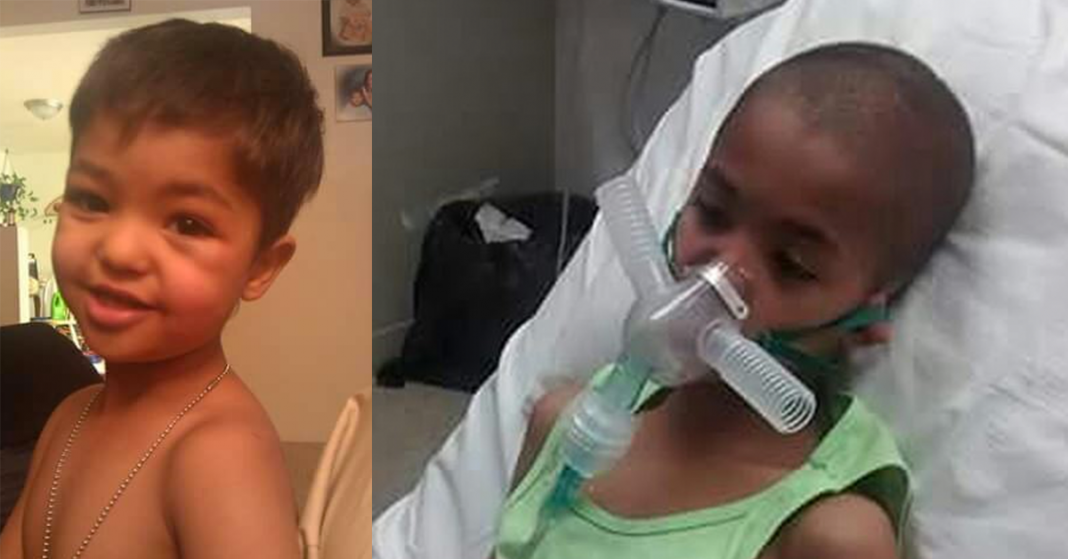 Our friend Tracy Bush, owner of Nutrimom Inc, contacted us with the heartbreaking story of one of her readers in desperate need. Here follows the account of her son Kolbyn and his lifelong struggle. Some of the details may ring familiar for you and your family, so please be forewarned that this account is every parent’s nightmare.

After this excerpt from the Nutrimom Blog is a link to donate to help defray the costs of Kolbyn’s care. We don’t often run appeals of this nature but we think you’ll agree this is a special case.

Excerpt from “I am forced to watch my son be sick”:

How is a mother supposed to sit back and watch her child get sick, especially if she has the medicine that will help him?
My son has been sick for the majority of his life (nine years). He gets Bronchitis, Pneumonia, Bronchialitis, Sinusitis, and urinary infections over and over. He is on a schedule of prednisone and antibiotics (on for 10 days, then off for five days,then back on the prednisone for seven more days, then off for five days, on for 10 days, off for seven days and then back on both prednisone and antibiotics starting the cycle all over again). When he is off the prednisone by day five, his oxygen level is at 92/93 percent. His inhaler no longer helps- he is wheezy and he can’t stop coughing. This happens every year. He only has three months out of the year where he does not have these issues and they are during the summer months. After many years of testing, we found multiple things that could be his problem.

When my son was born he was three weeks and six days early. It was a dry labor and he almost did not make it. He was not breathing and it took (what felt like) forever but was only half a minute or so to get him breathing.We had to stay in the hospital for seven days because the doctors were not sure if he was going to make it. After we got out, my son would try to eat but every time he did, he would cry and his stomach would be rock hard. He would be covered in hives. The doctors said he was allergic to something I was eating so I had to take out all major allergens from my diet and I was told after two or three days, he should get better. He did not get better- in fact, he got worse. So doctors decided he was allergic to my milk altogether. The next challenge was finding a formula that he was not going to react too. When he was four weeks old, he got his first cold (coughing, fever and vomiting). I took him to the doctor and she said “Babies get sick. It is just a cold and there is nothing we can do but wait it out. Push fluid. He will get better.”

That was it. There was nothing else that could be done for him according to the doctors. Days passed and he got worse and worse. I continued to take him back to the doctors where she told me the same thing every time. She never called for any tests and just assumed that I was a paranoid first time mother and a burden for her. When my son was 8 weeks old, I took him to get his pictures taken. He was in a little baby tuxedo and was the most adorable little 8 pound baby I had ever seen. But as we walked into the store, I looked down at him and his lips were blue. I stopped dead in my tracks. He was breathing but his lips were blue. I immediately called the doctor’s office- she told me that she just saw him yesterday and had patients that she needed to see that actually required her attention and that the best place for an overly dramatic parent like me was the urgent care center or the emergency room. After hours of waiting, his temperature was 103, his o2, 90-percent. They did not believe that this was accurate so they checked and rechecked. They then ordered a chest x-ray. By this time it was just after 7 P.M. and it was raining harder than I had ever seen before. The doctors and nurses frantically came into the room and told me that my son had bronchiolitis, was severely dehydrated and his oxygen level was way too low. I would need to then go to the E.R. for him to make it through the night. At 1 A.M. we finally got called back to be seen. He came back positive for Respiratory Syncytial Virus (R.S.V). They checked his oxygen level and found it at 83%. By that point they immediately admitted my son to the pediatric ward of the hospital, hooked him up to oxygen, gave him an I.V. and started running a few more tests. We had to stay at the hospital for 13 days. When we left, he was given a nebulizer and told to take it three times a day for at least a month.

He continued to get sick and seemed to be sick more often than not. He threw up every night multiple times but was fine during the day. He had hives on his stomach and face that came up after he ate and lasted for a few hours. The doctors decided that when he was 6 months old that he needed to take benadryl one hour before eating his meals. When he was 15 months old, he was diagnosed with a very severe dairy allergy and I was given strict instructions to take dairy and all 29 derivatives out of his diet. I was given a list of the derivatives and then I was sent home with no further assistance. When I got home I started going through all of the food that we had. At least 92% of the food in my house had dairy or a derivative in it!! And to top it off I had no idea how to cook. I sat down in the kitchen surrounded by all the food that my son could not eat and cried. For awhile, we had very simple meals of plain cooked meats and noodles/minute rice. Eventually I got better and learned some things to make that were dairy free. It seemed as soon as I got comfortable with him having a dairy allergy he got a new allergy. Every 6 months he would have an anaphylactic reaction to a food that he had previously been okay with.

Click here to read more of Kolbyn’s story on the Nutrimom blog.

Kolbyn’s story is a tragic one but there is finally some light at the end of the long tunnel. It’s up to us to help to write the closing chapter.

We are asking you to do four things. Please: