EpiPen Price Hikes Lead Senator to Sponsor Legislation, But Will it Help? 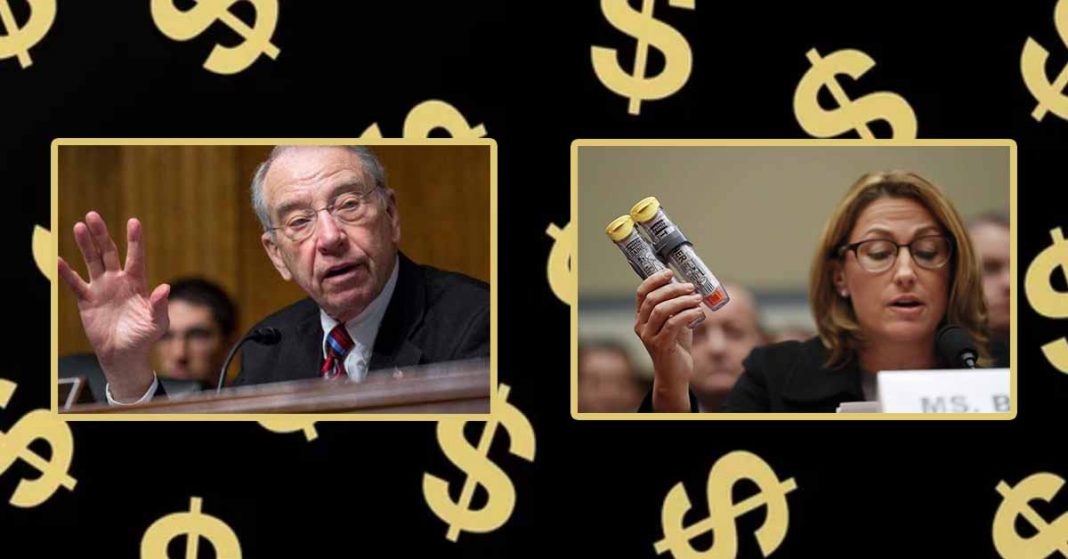 Yesterday, Senator Chuck Grassley (R-IA) issued a statement on his website regarding legislation he introduced after a decade of price hikes that saw Mylan raise the cost of EpiPen 400% from 2006-2016. But will it help consumers or is it just grandstanding? Here follows his statement followed by our analysis.

A couple years ago, I received a letter from an Iowan whose son had a severe peanut allergy. She wrote about how the price of an EpiPen, a popular anti-allergy prescription drug device, had skyrocketed. Though she and her family couldn’t afford the dramatic increase, she wrote that she would “pay whatever it takes” to keep her son healthy.
Her letter was one of many I received about price hikes of the EpiPen. More than one hundred Iowans contacted me through letters, phone calls and in-person at my 99 county meetings about their concerns. Though the exorbitant price was more than they could afford, the majority of Iowans had the same feelings as the woman who wrote to me about her son. They would sacrifice other necessities to pay because the lives of their loved ones were more important.


Click to visit sponsor
After Iowans raised their concerns about EpiPen, I looked into the issue and was stunned to learn that the price of the drug had increased more than 400 percent between 2006 and 2016. That was the catalyst for my years-long oversight effort to get to the bottom of EpiPen’s extreme price hike.
In cooperation with a bipartisan group of Senate colleagues, I sought answers from Mylan, EpiPen’s distributor, the Department of Health and Human Services (HHS), the Inspector General for Health and Human Services, the Centers for Medicare & Medicaid Services (CMS), the Department of Justice (DOJ), the Federal Trade Commission and the Securities and Exchange Commission (SEC) through letters and hearings.
During my investigation, it came to light that Mylan had classified the EpiPen as a generic drug rather than a brand-name product in the Medicaid Drug Rebate Program. That incorrect classification allowed Mylan to pay significantly smaller rebates to states like Iowa and the Medicaid Drug Rebate Program. It was also revealed that HHS and the HHS Inspector General didn’t have adequate authorities to properly oversee the Medicaid Drug Rebate Program and ensure that drugs were correctly classified. At my request, the HHS Inspector General investigated the misclassification’s cost to taxpayers and found that taxpayers were overcharged billions of dollars. It also uncovered that the EpiPen may not be the only drug that had been misclassified.

Click to visit sponsor
The EpiPen price hike was not only an unnecessary hardship for consumers of the drug, but also taxpayers. The taxpaying public pays for the majority of pharmaceuticals prescribed and provided to millions of patients through Medicaid and Medicare programs, as well as millions more of our nation’s veterans and military members. The misclassification of EpiPen, and other prescription drugs, cheats taxpayers and exorbitantly high prices put lives at risk.
As a result of my oversight and in light of the defects discovered in current law, Sen. Ron Wyden of Oregon and I introduced the Right Rebate Act of 2018. The legislation is the result of bipartisan cooperation with the common goal of enacting reforms to plug the loopholes that have allowed pharmaceutical companies like Mylan to game the system and keep drug prices artificially high at the expense of consumers and taxpayers.
Specifically, this legislation would give the secretary of HHS more tools to monitor drug manufacturers who participate in the Medicaid Drug Rebate Program and would allow the secretary to require those manufacturers to reclassify their drugs. The legislation would also grant the authority to impose civil monetary penalties on manufacturers when they knowingly misclassify prescription drugs.

Click to visit sponsor
Accountability is paramount to a well-functioning government and transparency is critical to maintaining trust between citizens and their elected representatives. The fiasco surrounding the EpiPen price hike has been a stark reminder of the importance of both. It’s also a powerful example of why it’s important for citizens to engage with their members of Congress.
Iowans are at the heart of this legislation. I look forward to working on a bipartisan basis with my colleagues to see it through the legislative process and deliver results for the people of Iowa and all Americans.

While we appreciate Senator Grassley’s outrage at the skyrocketing cost of EpiPen over the years, the legislation as described by him will do nothing to help the Iowans he cites or their fellow Americans afford medications. It leaves Big Pharma free to raise prices as they like.
Instead, it is intended to dissuade pharmaceutical companies like Mylan from bilking Medicare and Medicaid by misclassifying their drugs as generics – an important goal for sure, but the least he can do after years of analysis and still be seen as doing something.
Had this legislation been enacted in 2006, it would have done nothing to prevent Mylan from issuing the very price hikes that so hurt his constituents and the American people over the ensuing decade.
Tightening loopholes ensuring pharma pays their fair share to federal and state governments is absolutely necessary, but Grassley is making a big show out of applying a band-aid to a patient that lies hemorrhaging.