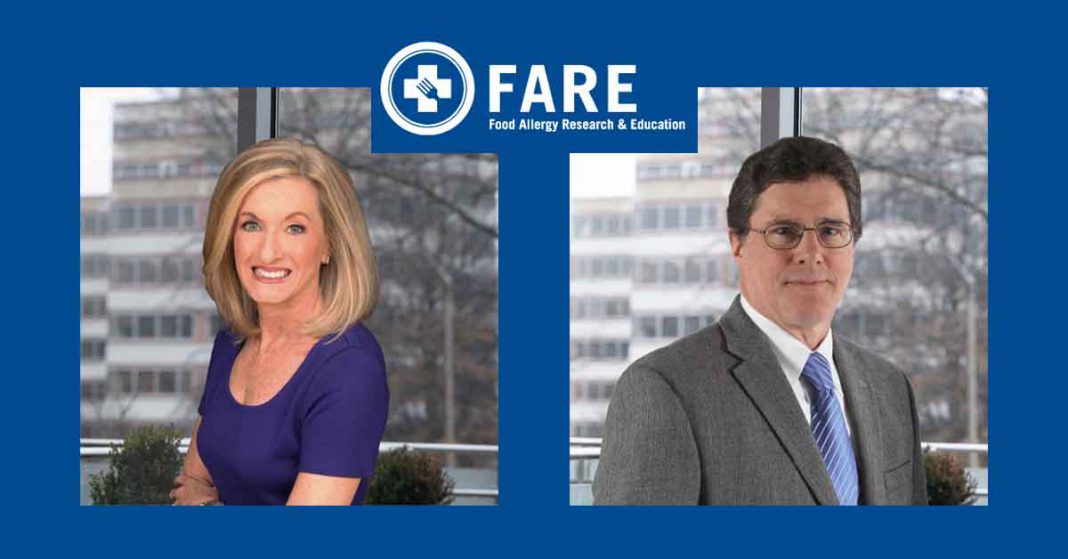 Please note that FARE contacted us to issue the following clarification to this article:

As our press release stated, Lisa had always planned to step back “in the Spring” of 2022, with no specific month/date noted. I believe, however, an incorrect headline on our FARE website stated that the departure date was May 2022 – and that is perhaps where you found this misinformation. We apologize for any confusion.

For clarity, I want to be certain you know that Lisa had always planned her official end date within a broad framework to ensure that FARE was in a good place and timing was right for a CEO transition. I hope you will be able to assist in rectifying this misperception of a rushed exit or date-specific timeframe.

Back in September, Food Allergy Research and Education (FARE) made the announcement that CEO Lisa Gable would be stepping down in May 2022 after the search for her replacement was completed. Now, suddenly, that plan has changed.

FARE announced Friday that Ms Gable would be stepping down at the end of this week with Bruce Roberts, FARE’s Chief Research Strategy and Innovation Officer, assuming the role of interim CEO as the search for Gable’s permanent replacement continues.

We found it surprising the non-profit would suddenly change course, issuing a press release announcing their CEO’s departure with a week’s notice, so we reached out to FARE for comment.

With FARE in its current position of strength and accomplishment, we have built the systems and infrastructure that allow us to begin that “next phase” in the 5 Year Plan. So, after much thought and reflection on what is best for FARE at this stage and for me personally moving forward, I wanted to share with you today that I am passing the baton to new interim leadership effective on January 14th.

I want you all to know that deciding when to step back from an organization that has been my passion and focus for the past 3 years is never easy; but I am confident that right now is the best time for a hand-off of responsibility to those who are critical players in the next part of FARE’s journey.

Stepping back at the start of the year also allows FARE to begin 2022 with a unified focus on research instead of the uncertainty of “when is Lisa leaving” constantly in the background. In addition, it moves the attention of FARE away from CEO transition and back to its core competencies, positive focus, and unlimited potential.

In response to our inquiry, Ms Gable said:

FARE’s transition to a new CEO is part of a process that was initiated when I announced my retirement in September 2021. My plan (in agreement with the Board) has always been to hand over the leadership reins when FARE is in a position of strength; when systems are in place for a smooth continuation of business; and, when the right person to lead the next phase of our 5-year plan has been identified. I am confident this is the right time and Dr. Bruce Roberts is the right person to lead FARE into 2022.

We congratulate Mr Roberts for his new role as interim CEO and wish Ms Gable much success in her next endeavor.

FARE CEO Lisa Gable announced her retirement in September 2021 and a transition process and new CEO search has been in process since that time. During her three years as CEO, Ms. Gable created a visionary plan to establish FARE as a world leader in food allergy research, advocacy and education. FARE’s solid foundation and forward-thinking in the food allergy community now pave the way for Dr. Roberts’ continued strong leadership into 2022.

“This leadership transition is occurring at an optimum time as we maintain our commitment to programs which not only educate our community and key decision makers, but also focus the majority of our dollars on research,” said Ms. Gable. “I feel confident in handing over the reins to Bruce at this time and am optimistic about FARE’s future – both in 2022 and beyond.”

Dr. Roberts’ background makes him a natural selection for interim CEO. In his current role at FARE, Roberts leads scientific research initiatives, leveraging his decades of experience in the biomedical industry. Overseeing research efforts and interacting directly with all stakeholders, he plays a pivotal role in uncovering new treatments and driving innovation that will eventually find a cure for this disease. Additionally, he is a regularly published author in the Journal of Immunology, the Journal of Neuroimmunology and other widely respected medical publications.

“I am honored to follow in Lisa’s footsteps and excited to continue FARE’s mission of advancing forward-thinking projects, messages and strategies that will have a positive impact on the lives of patients,” Dr. Roberts said. “This is indeed an exciting time to be at FARE.”

David Jaffe, Chairman of the Board for FARE, concluded, “We are extremely thankful to have had Lisa as our CEO for the past three years and equally pleased to welcome Bruce to the helm. Twenty twenty-two looks bright as we continue our legacy of commitment to the food allergy community.”

FARE is the world’s leading non-governmental organization engaged in food allergy advocacy and the largest private funder of food allergy research. Our mission is to improve the quality of life and the health of individuals with food allergies, and to provide them hope through the promise of new treatments. FARE is transforming the future of food allergy through innovative initiatives that will lead to increased awareness, new and improved treatments and prevention strategies, effective policies and legislation and novel approaches to managing the disease. To learn more about FARE, visit our Living Teal™ YouTube channel, or www.foodallergy.org.