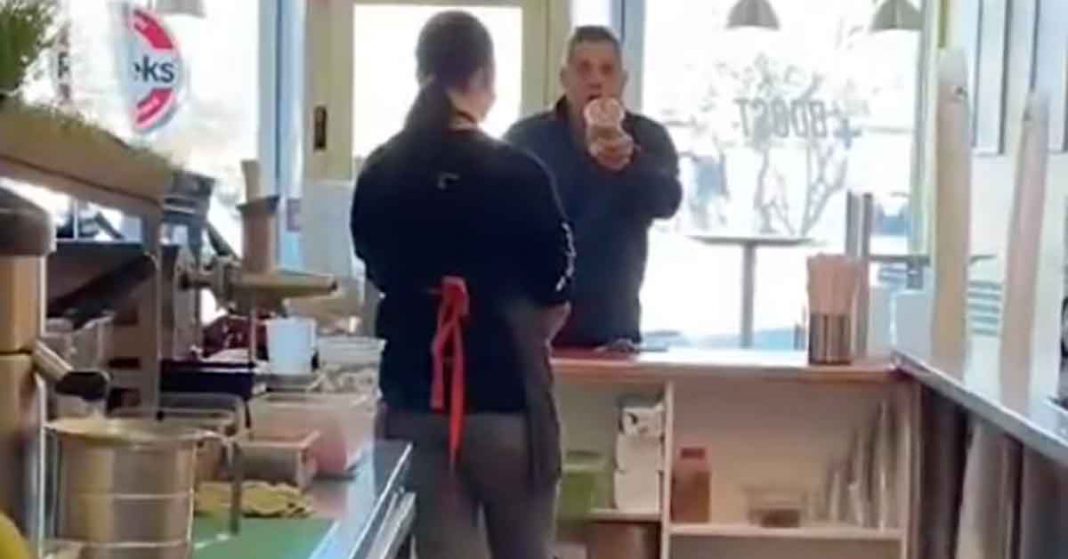 The James Iannazzo incident at a Fairfield Robeks exploded on the internet as the story was picked up by numerous mainstream news outlets and went viral on TikTok. To say our coverage of the incident sparked a heated debate on our site and social media would be a huge understatement.

For those of you that haven’t read the story or seen the video, at about 1PM on January 22, Iannazzo walked into a local Robeks and purchased a smoothie for his son who suffers from a peanut allergy. Although he asked that the drink not be made with peanut butter as it normally is, he did not mention the allergy when ordering.

About half an hour later after drinking the smoothie, the son suffered a severe anaphylactic reaction at home and was given epinephrine before an ambulance arrived to take him to the hospital. Thankfully, the son survived the ordeal and is fine.

The father, furious, stormed back into the Robeks and demanded to know which of the teenage girls on duty was responsible for making the drink.

Police received multiple calls at 2:26PM about a male customer in the Robeks who was throwing objects, yelling at the employees, and refusing to leave.

One of the staffers recorded Iannazzo’s tirade which included spouting ethnic slurs and hurling the leftover smoothie at one of the employees. He also tried unsuccessfully to gain access to the area behind the counter where the employees were stationed.


Iannazzo was subsequently fired from his job as an adviser at Merrill Lynch. He later issued a statement via his attorney apologizing for his behavior.

Being a food allergy dad of a daughter who, like his son, has a peanut allergy and carries two epinephrine auto-injectors with her at all times should she inadvertently come in contact with peanut (or egg) and react, I have my own perspective on the incident.

There is no doubt that Iannazzo was affected by his son’s anaphylactic reaction as any parent would be. That said, I feel strongly that the lion’s share of the blame rests with him.

Speaking from experience, I would NEVER have ordered food or drink for my daughter from an establishment where peanuts are used in the kitchen, let alone order a smoothie in which peanut butter is normally an ingredient. The chances for cross-contact and a subsequent reaction are simply way too high.

When my family does order food for my daughter, we make sure to talk directly to management, make clear the severity of her allergies, and gauge their response to determine whether we have confidence in their ability to accommodate her safely. If not, we leave.

When possible, we watch the food being prepared to make sure gloves are swapped and clean implements are used.

Finally, when the food is delivered, we make sure to double-check with the server that her allergies were taken into account throughout preparation and that all precautions to prevent cross-contact were made.

Iannazzo did none of those things. As such, he did not take the necessary precautions to safeguard his son from a serious reaction.

That said, Robeks is not off the hook related to this incident.

The employees should have been trained to know that a request to omit an ingredient may be due to an undisclosed allergy. They should have asked the father whether a food allergy was involved and upon learning that there was, implemented strict allergen protocols or warned him that his request could not be accommodated safely.

Beyond procedures, the behavior on both sides was appalling.

Iannazzo’s tirade was simply inexcusable; after cooling off, he should have called Robeks’ corporate office to report the incident. Instead, he stormed into the shop seeking retribution from a group of teenage employees.

I respectfully disagree with the parents who found his behavior acceptable: no matter how angry, frustrated, and anxious one might be from a perceived injustice to their child, there is never an occasion that warrants screaming ethnic invectives or hurling food at an employee, or threatening to break down a door. Never.

The employees, on the other hand, should have been trained to help defuse angry customers rather than dismiss them. Their attitudes from the start were defensive and rude which no doubt exacerbated Iannazzo’s rage, though that in no way excuses his behavior.

A question that sparked significant debate was whether Iannazzo should have been fired from his job as a result of the incident. Having worked in the financial industry for decades, I know — as I’m sure he did — that bad behavior off-hours can be cause for termination. How can he adequately represent his company to clients when his mugshot has been plastered on every news outlet across the country? He can’t, so his termination was justified.

That’s how I see it, and it’s evident from your responses that many of you see it differently. Regardless of where your opinions fall on the matter, I truly appreciate the time you all took to respond to our article, and many thanks for indulging me in doing likewise.

As always, your perspectives — and passion behind them — are valued and appreciated!