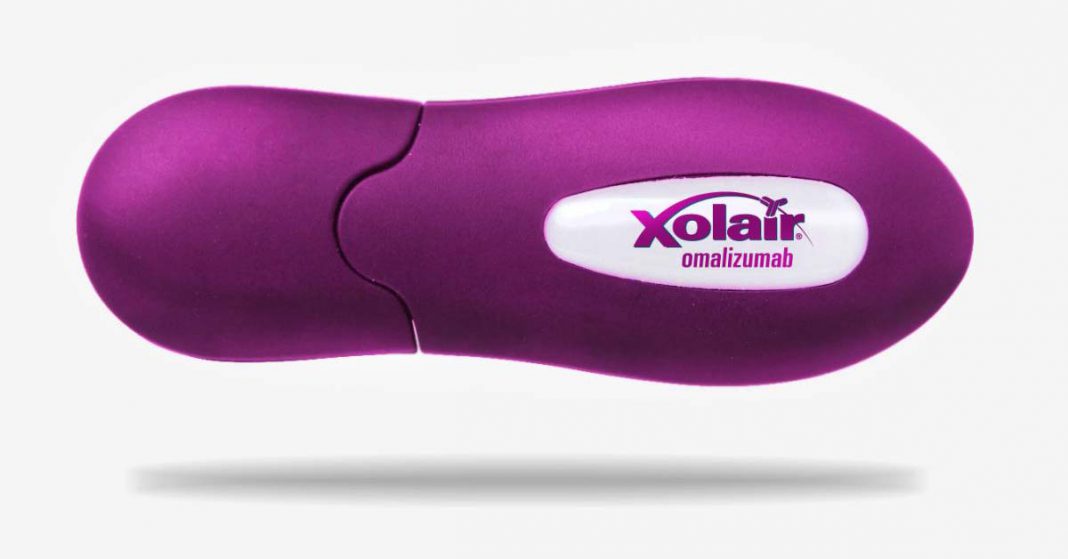 A Phase II clinical study published yesterday in The Lancet Gastroenterology and Hepatology determined that a procedure combining omalizumab – an asthma drug sold under the brand name Xolair – with oral immunotherapy (OIT) is safe and effective for treatment of multiple food allergies simultaneously.
An estimated 30% of people with food allergies are allergic to multiple foods.


“Patients find it very hard to live with multiple food allergies,” said the study’s senior author, Sharon Chinthrajah, MD, director of the Clinical Translational Research Unit at the Sean N. Parker Center for Allergy and Asthma Research at Stanford University. “It puts a huge social and economic burden on families.”

Click to visit sponsor
The trial, conducted at the Parker Center, used a placebo-controlled, randomized design to determine whether omalizumab made it safer and faster for children to receive oral immunotherapy to desensitize them to multiple foods simultaneously. At the end of the nine-month trial, 83% of children who had received omalizumab could tolerate at least 2 grams of two different food allergens, whereas only 33% receiving placebo reached the same level of tolerance.
The study included 48 children ages 4-15. Thirty-six children were randomly assigned to receive omalizumab, and 12 children to receive placebo, during oral immunotherapy. The drug or placebo was given for eight weeks before oral immunotherapy began, and also for the first eight weeks of oral immunotherapy. Immunotherapy continued without the medication or placebo for the next 20 weeks. The oral immunotherapy was tailored to patients’ individual allergies, with each child being treated for two to five of their food allergens. The foods included in the study were almond, cashew, egg, hazelnut, milk, peanut, sesame, soy, walnut and wheat, all of which are common causes of food allergies.

Click to visit sponsor
Children taking omalizumab were desensitized significantly faster than those dosed with placebo. They also had fewer gastrointestinal side effects during therapy, such as nausea and abdominal pain, and fewer respiratory side effects, such as shortness of breath. Twenty-two percent of oral immunotherapy doses in omalizumab patients and 54 percent of doses for placebo patients caused gastrointestinal side effects, while 0 and 1 percent of doses caused respiratory side effects in the omalizumab and placebo groups, respectively. None of the patients in the study experienced serious side effects, such as anaphylactic shock.
“We were excited to see the clinical efficacy of this combination approach using omalizumab and multiple foods,” said Chinthrajah, who is also a clinical assistant professor of medicine and of pediatrics at Stanford. “This could be a very promising way to decrease the burden of living with food allergies.”

Click to visit sponsor
“The study showed significant efficacy and safety improvements in multi-allergic patients treated with omalizumab and food immunotherapy,” said co-author Kari Nadeau, MD, PhD, director of the Parker Center and professor of medicine and of pediatrics. “Multi-allergic patients are at much higher risk for anaphylactic reactions since they are allergic to more foods, and omalizumab can help change the course of therapy by making it safer and faster.”
For more information on omalizumab’s use in treating food allergy, click here.
Source: Drug increases speed, safety of treatment for multiple food allergies – Stanford Medicine Press Release
Print or share this article
Print
Mail
Tweet
Share
Print or share this article
Print
Mail
Tweet
Share
Click to visit sponsor
Previous article
Phase I Trial of Epinephrine Nasal Spray for Anaphylaxis Begins
Next article
What We Learned from the Louis Tate Inquest