The Dope on Snopes: a Big 'Nope' 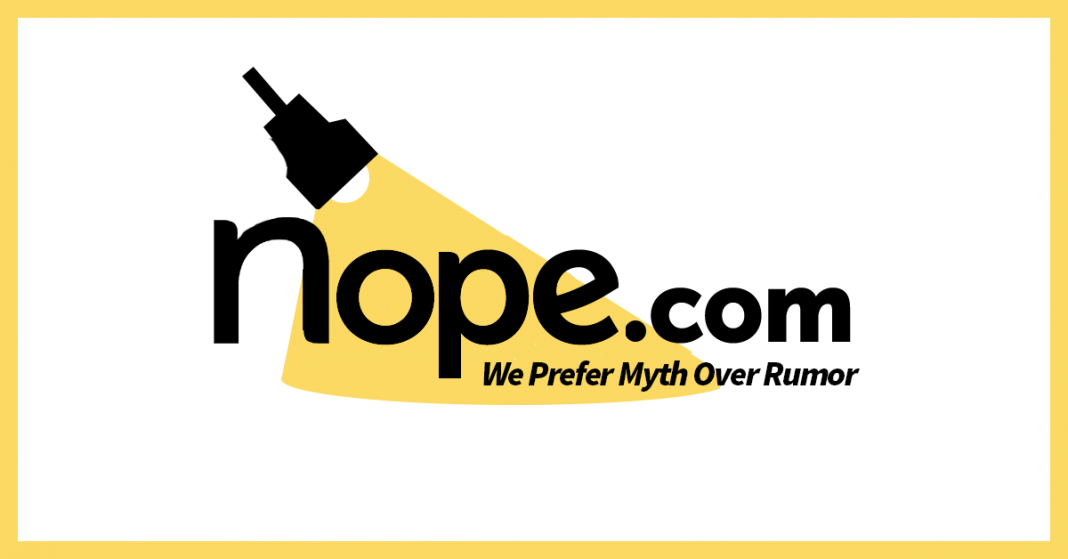 Though we enjoy paging through Snopes, a site that purports to address rumors, we’ve discovered first-hand their journalistic standards leave much to be desired. You may have seen their article entitled “Allergeez” which addresses a story we published and later retracted regarding Kellogg’s addition of peanut flour to a variety of Nutri-Grain bar that turned out to be discontinued.

In “debunking” the article, Snopes author Dan Evon played fast and loose with the facts, adding a few myths of his own by attributing assertions to us that we never made. Despite our letter to the site asking them to correct their article, Snopes never issued a correction nor added our comments to the article, compelling us to set the record straight by “noping” Snopes.

Here is Evon’s first do-si-do with the facts:

There have been changes to some products from the company. However, the insinuation that it was done in secrecy and that Kellogg’s has not commented on the ingredients in its products is misleading. At least two statements (one regarding the Austin Cracker line and one regarding Keebler) explained the ingredient updates, and subsequent label adjustments, in April 2016:

The problem is we never “insinuated” Kellogg’s did anything in secrecy; we openly castigated the company for disclosing the addition of peanut flour on FARE’s website only with no press release or mention on their own site. Here’s what we said in our video on the subject, published April 16: 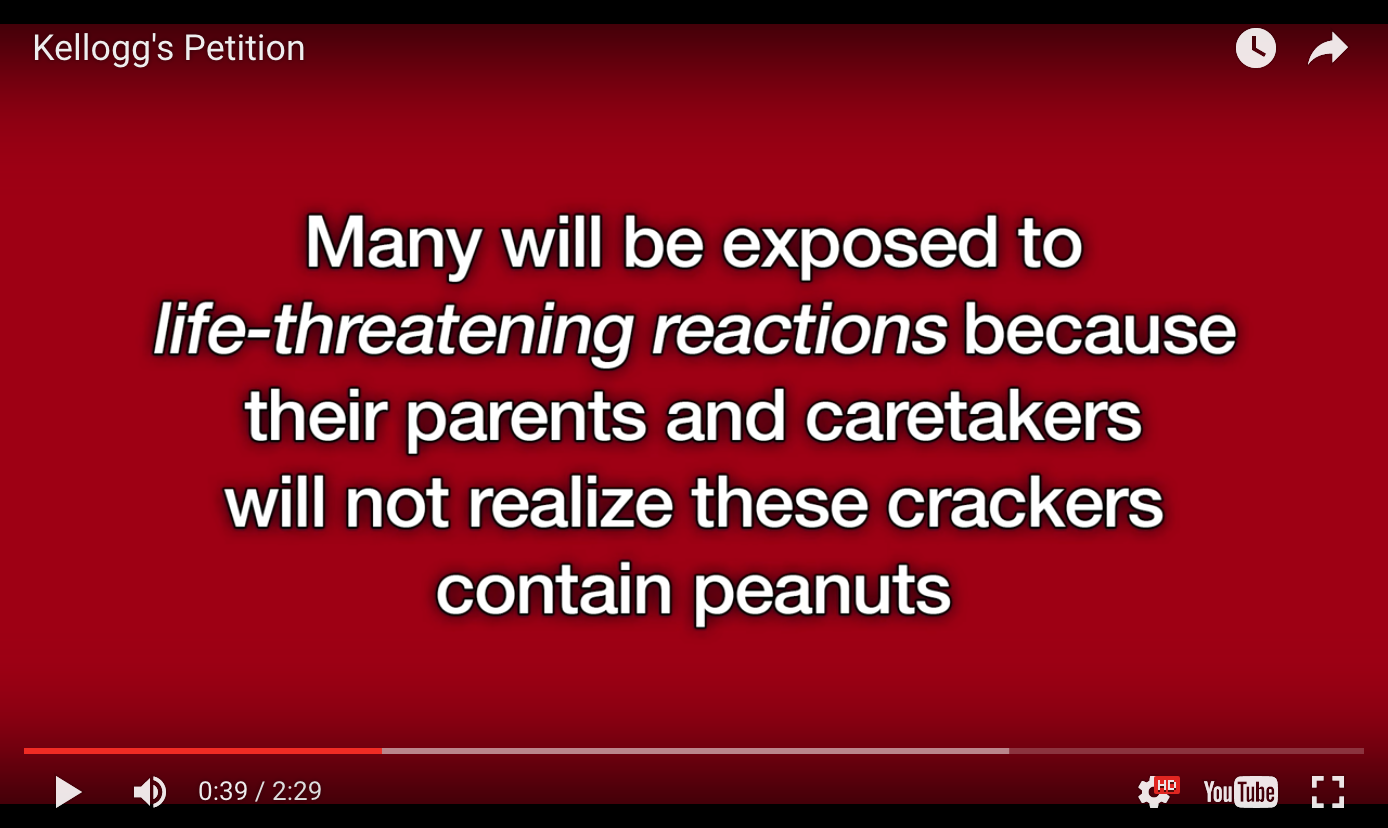 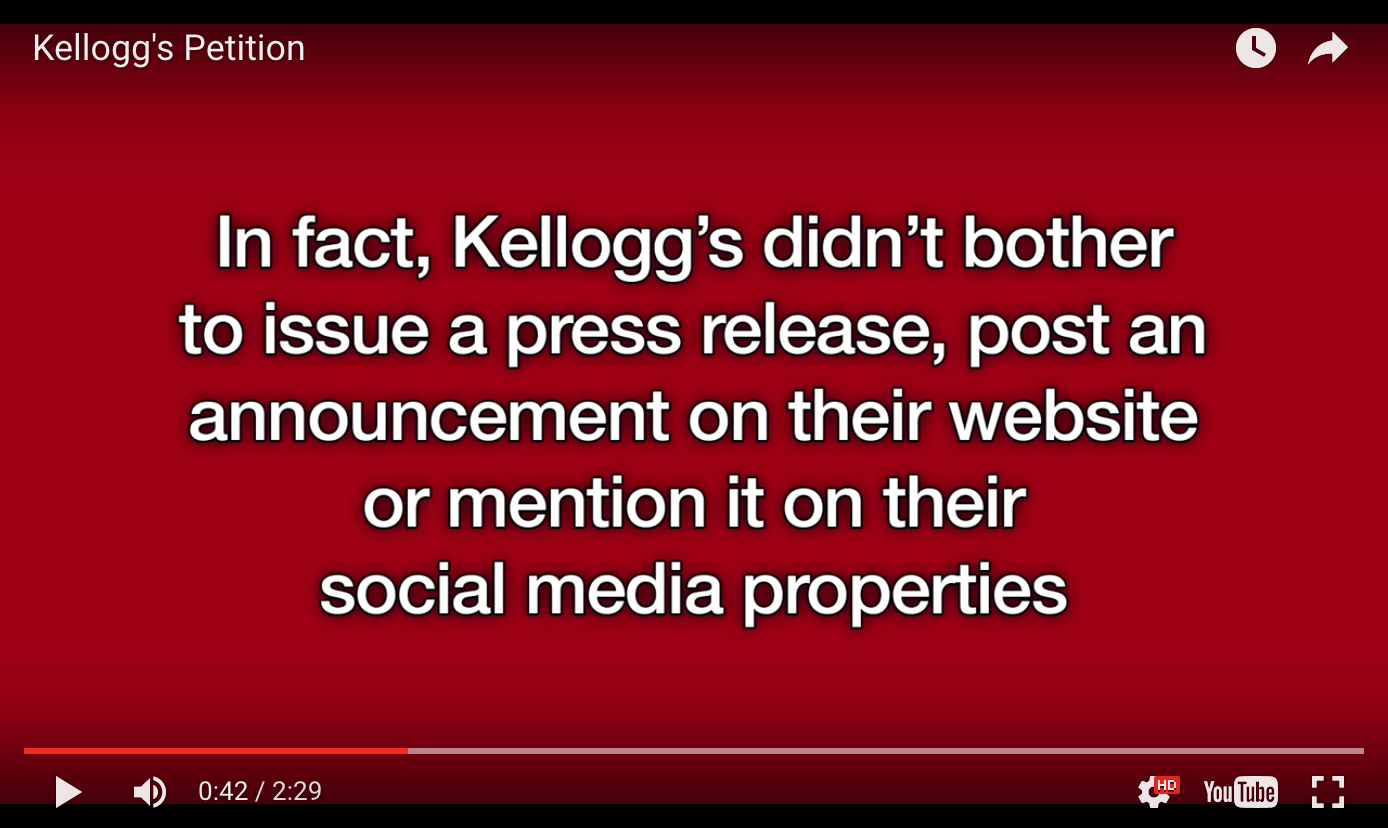 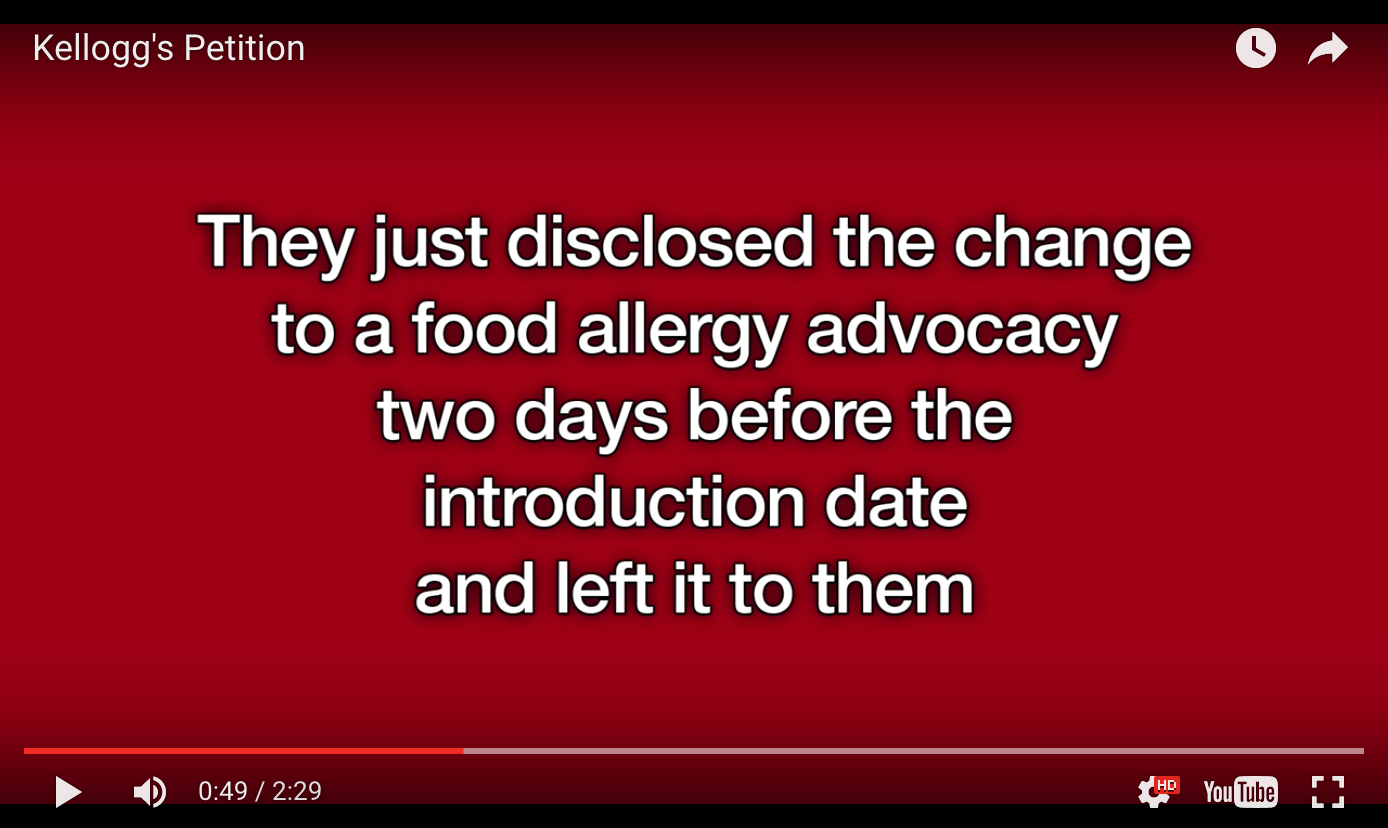 Had Evon bothered to do even the slightest bit of homework before writing his article, he would have realized we don’t insinuate but call them as we see them.

Next, Evon dances a quick Two-Step:

Given the prevalence of peanut and other nut allergies and the strictness of the Food and Drug Administration (not to mention the high-profile public relations nightmare that would ensue after a spate of allergy-related illnesses or deaths) it seems extraordinarily unlikely that any company would alter recipes for popular foods in secret to introduce ingredients that would have a potentially devastating effect on its consumers.

Again, we never claimed Kellogg’s added peanut flour in secrecy nor did we claim they were doing so without complying with FDA’s labeling guidelines regarding the disclosure of peanuts on the label. In fact, we published an article critical of how Kellogg’s labeled their products, showing this comparison of the packages before and after the peanut flour addition: 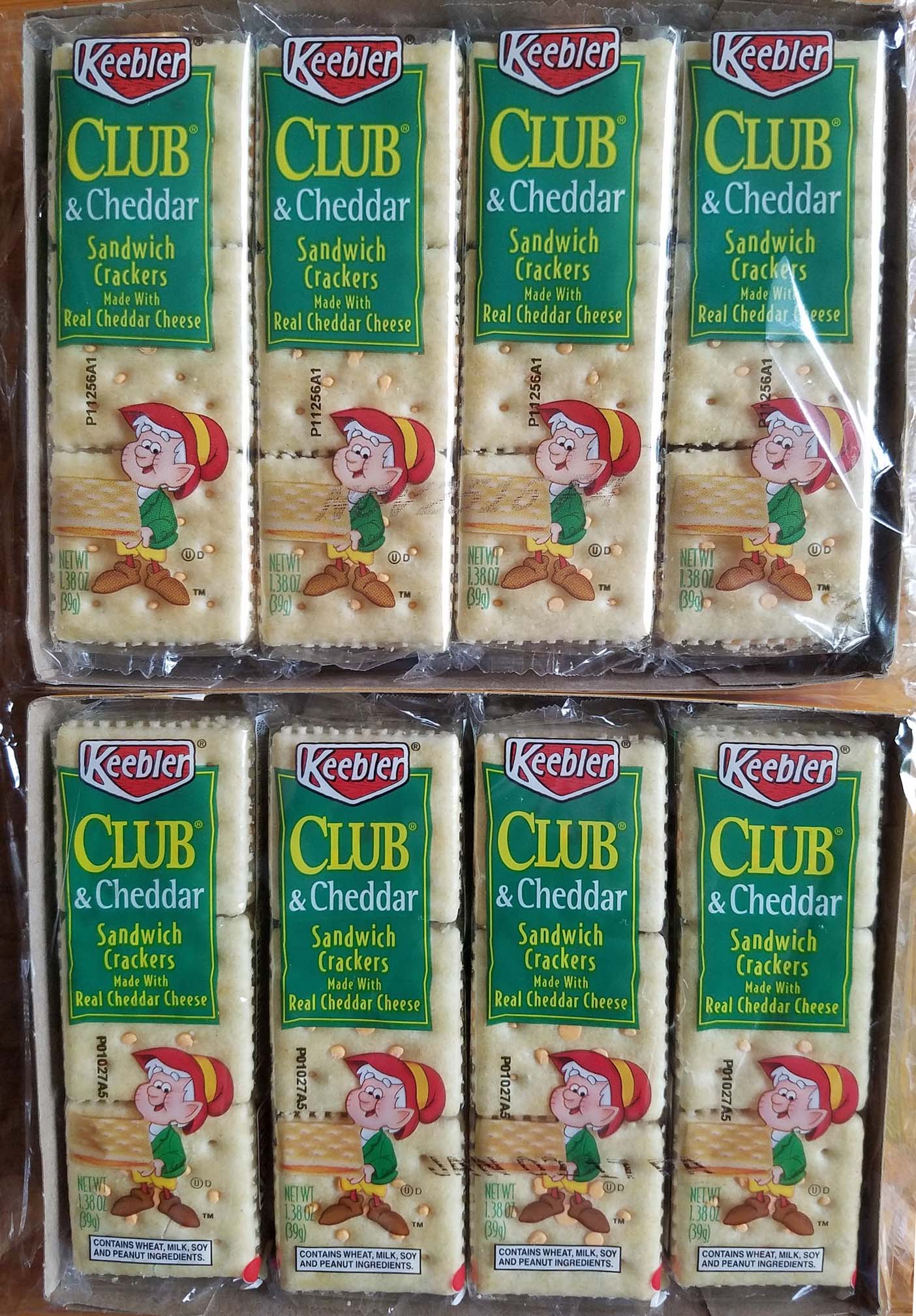 Once again, Evon ascribes assertions to us without bothering to apply the least bit of journalistic rigor. We know Kellogg’s must comply with the law regarding labeling and have never refuted that fact by claiming they did so secretly. Again, we took Kellogg’s to task for the way they made their disclosures.

Finally, Evon does a Grand Pirouette by treading into a realm he knows absolutely nothing about and taking Kellogg’s assertions as fact:

While it is true that Kellogg’s added peanut flour to some of its products in 2016, there’s no evidence that the decision to do so was to “avoid the complications of complying with the Food Safety Modernization Act.” After all, Kellogg’s has announced dozens of ingredient changes over the years. Further, the company also said that it will be releasing an Austin Cracker flavor that does not contain peanut flour this September:

Indeed, Kellogg’s made many ingredient changes over the years but that has absolutely nothing to do with the recent addition of trace amounts of peanut flour to varieties of crackers that were considered by many to be peanut-safe before.

Evon – who evidently has studied the coming FSMA directives and knows what lies in the hearts of executives at Kellogg’s – is quick to dismiss our reasoning for why the company would add minute quantities of an allergen to previously safe products: so they can include the allergen on the ingredient list and by doing so avoid stricter mandates for allergen control that take effect in September. The evidence is there – however circumstantial – but Evon doesn’t refute this with the company’s stated reason for doing so because Kellogg’s will not disclose their reason. (Update: Kellogg’s has finally admitted that they are adding peanut trace specifically so they can add the allergen to the ingredient list because these snacks are made on shared lines.)

And yes, the company did indeed announce a plan to remove the peanut flour from one variety of cracker in September after adding it now, but Evon doesn’t bother to inform his readers that Kellogg’s is doing so in response to our petition, nor does he realize that Kellogg’s plan to accommodate the food allergy community will actually make matters more confusing and dangerous, nor is he interested in why the company would insist one day they needed to make this manufacturing change to eight products while a short time later finding a way to obviate that need for one of them.

Snopes seems more than willing to whitewash Kellogg’s actions without bothering to perform any level of rudimentary investigation and are equally willing to ascribe statements to us that we never made.

All in all, we give Snopes a big “Nope” for this story and will remind ourselves to take their articles as infotainment rather than journalism.

Here’s the letter we sent to Snopes in response to their “Allergeez” story:

A number of corrections to your story.

SnackSafely.com (the correct name of the company) NEVER asserted that Kellogg’s was adding peanut flour to ALL it’s products as you state in your piece; you got this wrong. We DID assert that they had added a trace amount of peanut flour to products beyond the Keebler and Austin varieties and that we expect more such additions in the future. We were alerted by our readers of the particular product mentioned in the article and were NOT informed it had been discontinued by the Kellogg’s consumer line.

You state “it seems extraordinarily unlikely that any company would alter recipes for popular foods in secret to introduce ingredients that would have a potentially devastating effect on its consumers”, but we NEVER stated this. OF COURSE Kellogg’s would comply with FDA labeling regulations and disclose peanuts on the label. What we actually stated is that the company had done so without issuing a PRESS RELEASE; you got this wrong too.

Our concern all along has been that Kellogg’s egregiously mishandled the addition of peanut flour to products that did not contain it before by “quietly” disclosing this fact on one food allergy site with no other notification to consumers and no clear indication on the product that the formulation had changed.

What we DO take issue with is that the company sought fit to add minute traces of peanuts to these products for a reason DESPITE the addition posing a hazard to people with peanut allergy, and we CLEARLY state on our blog that we SURMISE this is to circumvent the FSMA directives that take effect this September. We believe that Kellogg’s is adding peanut trace so this ingredient can be added to the label – NOT in secret as you state – thus freeing the company from complying with the new directives for these products. Despite multiple requests, the company refuses to disclose WHY they have taken this action.

That said, YOU surmise that “it seems extraordinarily unlikely”. I urge you to read the FSMA Final Rule for Preventive Controls for Human Food (http://www.fda.gov/Food/GuidanceRegulation/FSMA/ucm334115.htm) then ask yourself why a company like Kellogg’s would add trace amounts of peanuts – less than the quantity of Yellow #6 – to products that did not contain them before, then ask your source at the company.

Kindly reread the article and the context provided by the links to other articles at the conclusion, then please correct your piece.

How We Started SnackSafely.com and How to Start Your Own Blog on the ShandeeLand Podcast