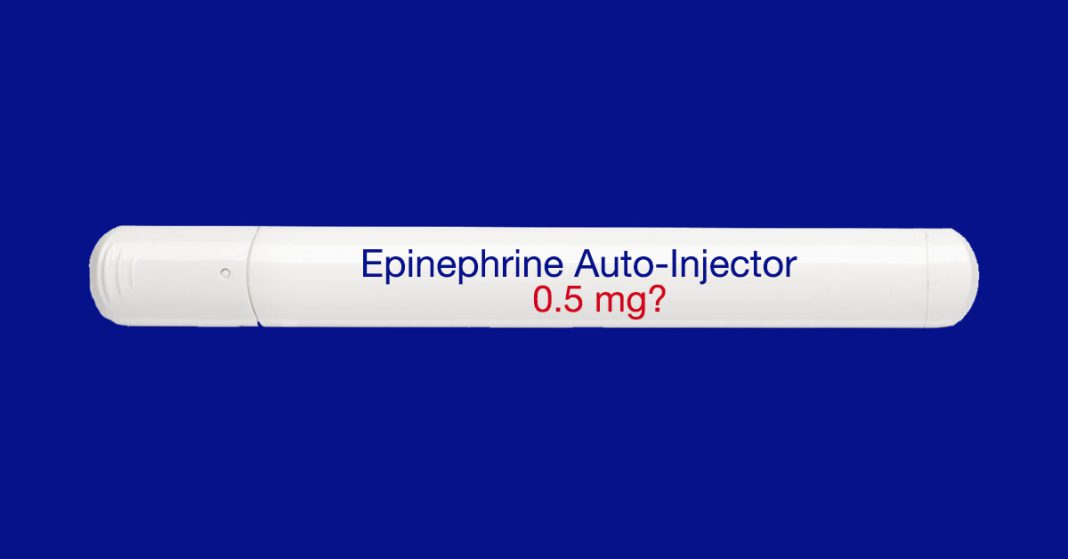 What is the optimum dose of epinephrine for adults to self-administer when they are suffering life-threatening anaphylaxis? A new study published in the Journal of Allergy and Clinical Immunology may bring further clarity to the debate.

First, it’s important to understand the current dosing guidelines which vary based on the weight of the individual. For infants and children, the recommendation for epinephrine is 0.01mg/kg. Two epinephrine auto-injector doses serve this population:

For adults, the recommendation is 0.3mg – 0.5mg. In the US and Canada, the following auto-injector dose serves this demographic:

Though not available in the US and Canada, 0.5mg dose epinephrine auto-injectors are sold in the UK and elsewhere. Are they warranted, and if so, why aren’t they sold here?

The question of necessity is a complex one. An article by Dr John M Kelso in the February 2010 edition of the JACI entitled “A second dose of epinephrine for anaphylaxis: How often needed and how to carry” provides the following insight:

Even given the paucity of current data, it would seem that in cases of anaphylaxis severe enough to require a dose of epinephrine, it is not uncommon (16% to 36% of cases) to require a second dose.

We question why a 0.5mg epinephrine auto-injector is not available here given the need for a second dose of epinephrine is not uncommon and recommendations state that adults should receive between 0.3mg and 0.5mg of the drug.

Matthew Grissinger, RPh, FASCP provides the answer in this article published in the journal Pharmacy and Therapeutics in 2017:

An intramuscular (IM) dose of 0.3 to 0.5 mg of EPINEPHrine is recommended for anaphylaxis in adults, but no comparative trials have been conducted to determine which dose is most clinically effective. Autoinjectors of 0.3 mg are available for adult use, and repeat doses are recommended at five to 15 minute intervals until symptoms improve.

This brings us to a recent study by the Imperial College London published in the February 2020 edition of the JACI that specifically looked at the safety and absorption of 0.3mg vs 0.5mg doses in teenagers with food allergy.

In a small, randomized, single cross-over study of 12 teenagers, each was given both a 0.3mg and a 0.5mg dose during separate visits at least 1 month apart. Serial blood samples were drawn for three hours after injection to determine the relative levels of epinephrine accumulated in the blood plasma, an indication of how much of the drug is bioavailable to treat the symptoms of anaphylaxis.

The researchers determined that epinephrine was well-tolerated regardless of dose with no significant adverse events. The 0.5mg dose resulted in higher peak levels and more epinephrine absorbed into the blood plasma than the 0.3mg dose, maintained up to an hour after administration.

A 0.5mg dose of intramuscular epinephrine results in a greater plasma catecholamine level than a 0.3mg dose. This provides the first published pharmacokinetic data with respect to epinephrine dosing by the intramuscular route using autoinjector devices in food-allergic teenagers at risk of anaphylaxis.

These findings may open the door to consideration by the relative regulatory agencies that a higher dose of epinephrine auto-injector should be approved for US and Canadian patients.