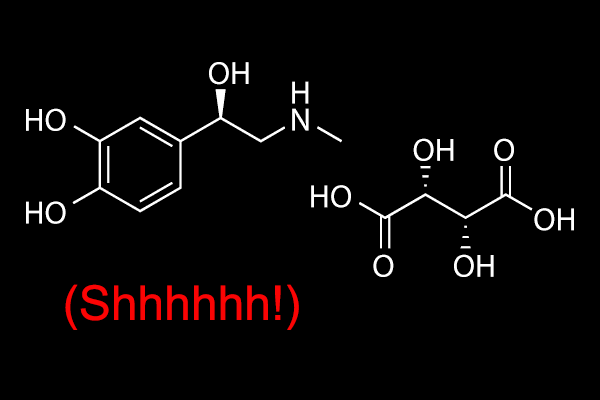 We’ve been reporting on the progress of AQST-109 by Aquestive Therapeutics, a postage-stamp-sized film placed under the tongue that provides epinephrine in an anaphylactic emergency. The drug candidate, which obviates the need to carry bulky epinephrine auto-injectors and fear of the needle, recently received the FDA’s Fast Track designation which hopefully will speed approval and shorten time-to-market.

Now, a stealth-mode competitor has appeared on our radar. A company known as pHase Pharmaceuticals was recently granted US patent #11,253,488 for a sublingual epinephrine tablet. The patent abstract states:

The patent goes on to say:

Little is known about pHase Pharma other than a press release issued in 2010 announcing the formation of the company. Here is what they had to say a dozen years ago:

The principals of pHase have already invested significant capital to initiate the development of a superior form of delivery for a drug in the allergy/immunology space that offers significant clinical, cost and ease of use advantages over the current form of treatment.

Like other companies operating in stealth mode, their website displays a parking page with no other information about the firm or its activities:

Now that a patent has been granted, we assume we will hear more about pHase and their emergency epinephrine alternative including how far along they’ve come in the development and approval process.

We are heartened by the news of yet another company seeking to bring innovation to the self-administered epinephrine market, one that until recent years was dominated by a single company, Mylan, that used its near-monopoly status to raise prices over 500% over a span of 7 years.

More options in the epinephrine market will lead to more competition, more innovation, and lower prices. We can’t wait!