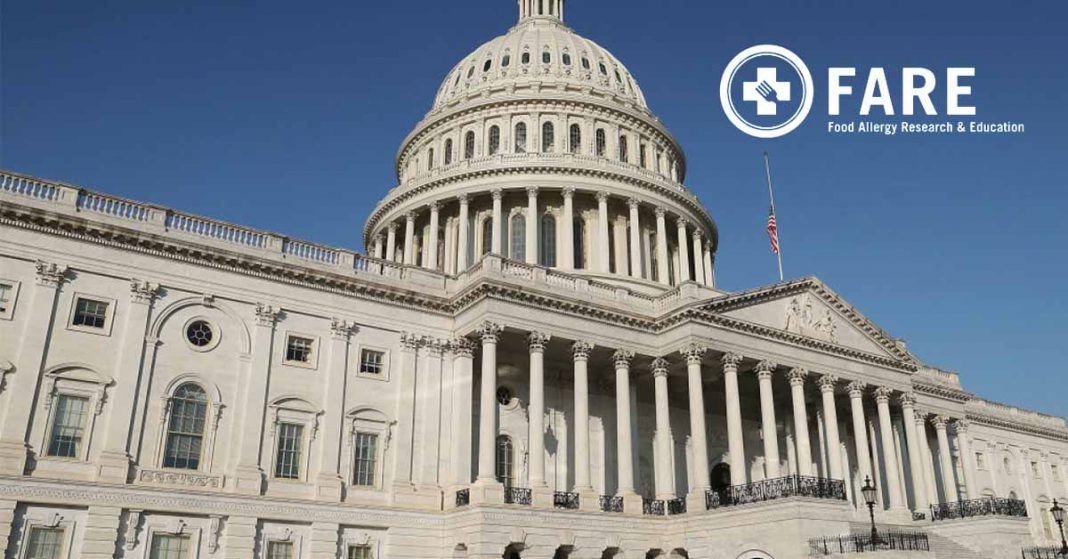 The United States House of Representatives today passed the Food Allergy Safety, Treatment, Education and Research (FASTER) Act (S. 578), a critical piece of legislation requiring that sesame be labeled on packaged foods and prioritizing food allergy research. This legislation will benefit the 85 million Americans who are affected by food allergies or intolerances, of which 32 million suffer from a potentially life-threatening condition.  Last month, FARE hosted its Courage at Congress virtual fly-in where 500 food allergy champions met with more than 200 members of the House, Senate and their staff to push for passage of the bill.

“There is nothing more important to the food allergy community than ensuring that the FASTER Act is put into law,” said Lisa Gable, chief executive officer of FARE. “On behalf of the nearly 1.6 million Americans who are allergic to sesame, I thank Representative Doris Matsui (D-CA-6) and Representative Patrick McHenry (R-NC-10) for championing this critical piece of bipartisan legislation and now look forward to President Biden signing it into law.”

The FASTER Act has been the highest legislative priority for FARE, the world’s leading non-governmental organization engaged in food allergy advocacy and the largest private funder of food allergy research. Today’s action follows the Senate’s passage of the bill on March 3, 2021.

The FASTER Act would require that sesame be labeled as an allergen on packaged foods. Sesame would become the ninth food allergen for which the U.S. Food and Drug Administration (FDA) requires plain-language labeling. Sesame is often used when a label reads “natural flavors” or “natural spices,” adding another layer of difficulty when consumers review product labels at their local grocery store. This is the first time since 2006 that a new allergen has been added to the Food Allergen Labeling and Consumer Protection Act (FALCPA).

“Today is a testament to the hard work of thousands of food allergy advocates who sent emails, made calls, and visited members of Congress and staff to build support and make sesame the ninth allergen to be labeled under law,” said Congresswoman Doris Matsui. “The outpouring of support was incredible, and I’d like to thank Lisa Gable and everyone at FARE for their hard work mobilizing this dedicated, resilient community. The FASTER Act will truly make a difference for those living with potentially life-threatening food allergies and we are proud that it will now be signed into law.”

The FASTER Act would also require the Secretary of Health and Human Services (HHS) to issue a report on scientific opportunities in food allergy research that examines prevention, treatment and new cures. In addition, the legislation establishes a risk-based scientific process and framework for establishing additional allergens covered by the Federal Food, Drug, and Cosmetic Act.

“Today, I was proud to see the FASTER Act pass the House, said Congressman Patrick McHenry.  “This bill provides a much-needed update to allergen labeling laws to include sesame, which affects the over 1.5 million people allergic to sesame. Additionally, the bill will enable us to better treat the millions of Americans that suffer from life-threatening food allergies by requiring the Secretary of Health and Human Services to regularly review promising food allergy treatments and research.”

“Today is a life-changing and life-affirming day for our family and for the families of the nearly 1.6 million Americans allergic to sesame,” said Talia Day, a food allergy advocate with two children who are allergic to sesame.  “With today’s passage and hopefully President Biden’s signature, no longer will I have to live in fear that my children could accidentally eat something that would kill them simply because it was not included on a food label. I thank Senators Scott and Murphy, Representatives Matsui and McHenry, FARE, and the thousands of food allergy advocates who helped make today possible and created a better future for the more than 32 million Americans living with potentially life-threatening food allergies.”

For more information on the importance of the FASTER Act, please visit foodallergy.org/FASTER.

FARE (Food Allergy Research & Education) is the world’s leading non-governmental organization engaged in food allergy advocacy and the largest private funder of food allergy research. Our mission is to improve the quality of life and the health of individuals with food allergies, and to provide them hope through the promise of new treatments. FARE is transforming the future of food allergy through innovative initiatives that will lead to increased awareness, new and improved treatments and prevention strategies, effective policies and legislation and novel approaches to managing the disease. To learn more about FARE, visit our Living Teal™ YouTube channel, or www.foodallergy.org.