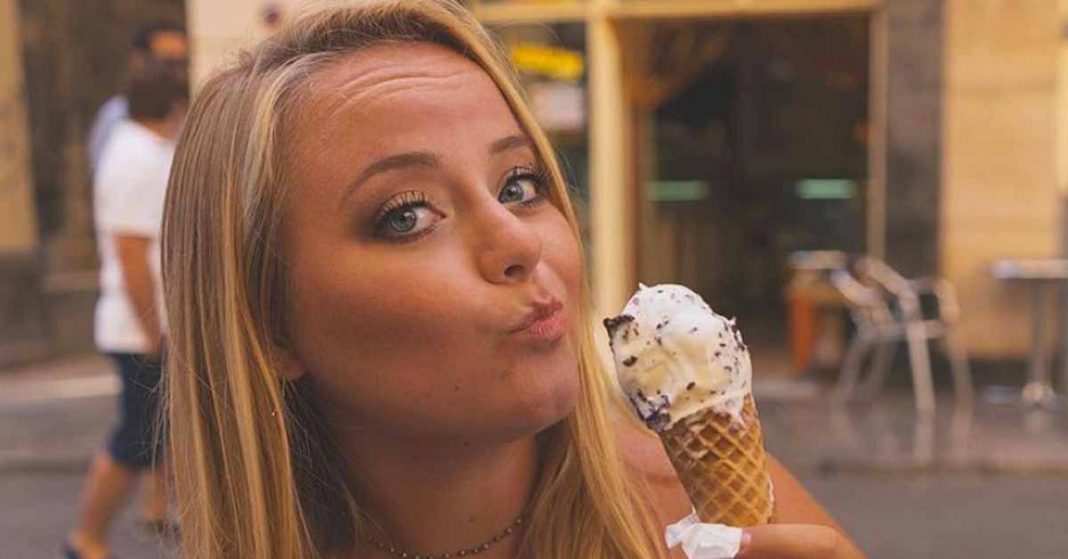 Annika Larson, a 22-year-old Texan, was on vacation in Rome, Italy on September 28 when she opted for a chocolate gelato at a cafe.

Annika has a severe allergy to tree nuts but was assured by staff the gelato was nut-free.

A few minutes after eating the treat, she struggled to breathe and her face started to swell. She realized she was in the midst of an anaphylactic reaction, a serious life-threatening reaction to a food, substance, or insect venom.

Annika picks up the story:

I’m allergic to all nuts and after doing research, I believe the gelato contained cashews and almond paste.

At the time, I was told it was raw gelato meaning it was made with fruit, chocolate and water with no added ingredients.

I asked if the gelato contained nuts and the staff told me it didn’t.

Just a few minutes after eating it, I felt my tongue and throat starting to tingle and as time went on, my eye began swelling, along with my lips and I had to use my EpiPen.

The ambulance rushed me to hospital and I was classed as a code red which was the highest level of urgency.

Once I got to the hospital, I passed out and woke up thinking I was dying.

If I didn’t have my EpiPen, I would have died and I think food establishments need to label their food more clearly.

I ate the gelato at around 4:48pm and had the first reaction 10 minutes later.

I was told the gelato was vegan which should have been a red flag for me as vegan products are often made with nuts.

I went straight to a pharmacy and took an antihistamine but it kept getting worse.

We got in a taxi back to the Airbnb where I called my doctor and he told me I had to use my EpiPen – I was scared to do this as I knew it meant I’d have to go to a hospital.

We went back to the pharmacy and they did it for me and called an ambulance.

The EpiPen helped me breathe better but the reaction was still ongoing.

I was in the hospital from 6:30pm until midnight when I was discharged.

This could have killed me if I hadn’t acted quickly.

It would be helpful for people suffering from allergies if food establishments labeled their food.

Natasha’s Law should be worldwide – I’ve been to lots of places before where I’ve told them I have an allergy and they don’t know what’s in their own food.

We are relieved to hear Annika survived and happy all turned out well. We wish her the best after her ordeal.

As we always do when we report these incidents, we look for learning opportunities that can prevent such occurrences from happening to others in the future.

We commend Annika on carrying her epinephrine auto-injector with her. We encourage all individuals who have been prescribed epinephrine to take two auto-injectors along everywhere, every time.

That said, taking antihistamines first when anaphylaxis is suspected is not advised. Instead, immediately administer your epinephrine and call emergency services. Only epinephrine can halt the progression of anaphylaxis, and administering other drugs first will delay the administration of epinephrine and may mask symptoms. Epinephrine first, period.

We also urge you to forego any unwrapped, unlabeled food unless you are absolutely sure of the ingredients, how the food was made, and how it is being served. Staff may not be trained to understand the intricacies of food allergies, allergens, and cross-contact. Speak with the manager and ask for an official allergen card. If one is not available, move on.