What We Learned from the Adrian Peterson Story 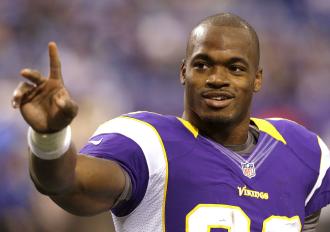 Reports of Pro-Bowl Linebacker Adrian Peterson’s 2011 bout of anaphylaxis are making the rounds again. While we applaud Peterson’s advocacy, let’s take the opportunity to recap what we learned.

Peterson, who had no prior history of shellfish allergy, ate a bowl of seafood gumbo for lunch during training camp. About 30 minutes later, he began experiencing classic symptoms of anaphylaxis: itchiness and swelling of the eyes and swelling of his throat resulting in difficulty breathing. He called his trainer who recognized the symptoms and immediately administered epinephrine from an auto-injector he kept on-hand.

Shortly after the injection, Peterson felt his throat open and was able to breathe easier. He was rushed to the hospital where he was subsequently diagnosed with allergies to shrimp, lobster and scallops. He now carries an auto-injector everywhere he goes.

There are two important facts to glean from this story:

The story highlights the necessity for states to enact stock epinephrine laws for schools as well as other places of public accommodation. Had Peterson’s trainer not had epinephrine on-hand, we may have lost an NFL icon and learned the same lessons by reading his obituary.

It is estimated that 25% of the incidents of anaphylaxis that occur in school do so in children with no prior history of food allergy, and so carry no epinephrine of their own. The School Access to Emergency Epinephrine Act recently signed into law provides incentives for states to adopt stock epinephrine laws, but parents must be vigilant to ensure their state legislatures take action.

The  Allergy & Asthma Network Mothers of Asthmatics (AANMA) provides a great service by tracking legislation for each state. Click on the map to visit the AANMA site to learn the status of legislation in your state. 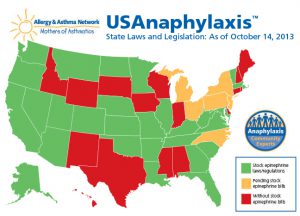 We must also expand these laws to include other places of public accommodation where anaphylaxis is more likely to be triggered, such as restaurants, theaters, sports venues, etc. With the explosion in the prevalence of food allergy, access to emergency epinephrine must be made available much the way access to cardiac defibrillators is commonplace.

With the enactment of federal school epinephrine legislation, many are learning about the dangers of food allergies for the first time. Let’s keep the momentum going by spurring our legislators to take the next steps.