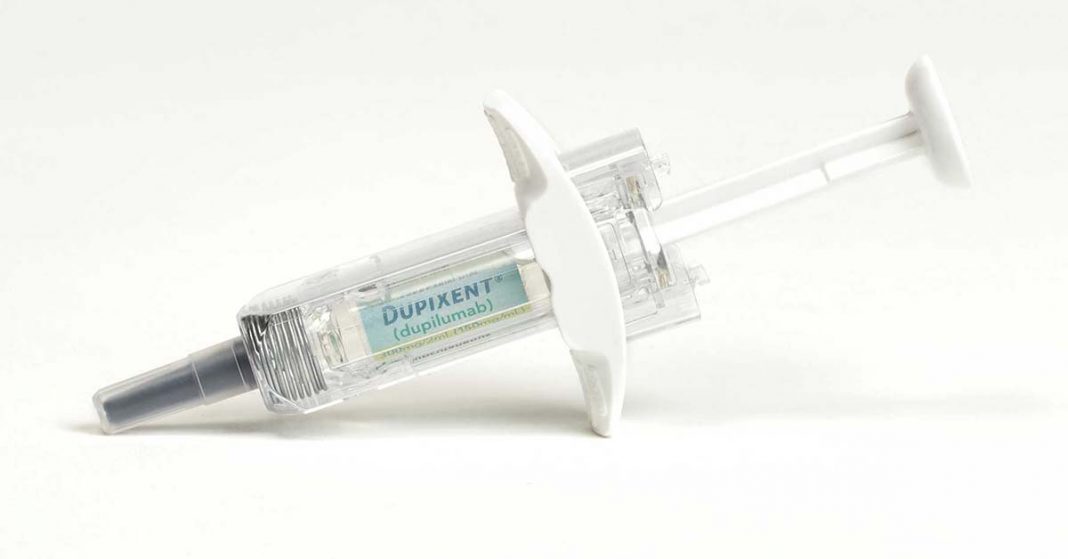 Only therapy that targets the IL-4/IL-13 pathway, a key driver of the allergic or type 2 inflammation that underlies atopic dermatitis

In a Phase 3 trial, Dupixent significantly reduced the extent and severity of disease and itching, and helped adolescents achieve clearer skin

Regeneron Pharmaceuticals, Inc. (NASDAQ: REGN) and Sanofi today announced that the U.S. Food and Drug Administration (FDA) has approved Dupixent® (dupilumab) for adolescent patients 12 to 17 years of age with moderate-to-severe atopic dermatitis whose disease is not adequately controlled with topical prescription therapies or when those therapies are not advisable. Dupixent can be used with or without topical corticosteroids.

“For the first time, adolescents with uncontrolled moderate-to-severe atopic dermatitis have an approved biologic treatment option to help control persistent, often debilitating symptoms such as chronic itch and widespread rash. Today’s approval expands the use of Dupixent in the U.S. to include both adults and adolescents with atopic dermatitis or moderate-to-severe asthma,” said George D. Yancopoulos, M.D., Ph.D., President and Chief Scientific Officer at Regeneron. “Given that Dupixent targets a key pathway in type 2 inflammation, we are also investigating it in a broad development program in patients with other type 2 inflammatory diseases including eosinophilic esophagitis, chronic rhinosinusitis with nasal polyps, where we recently announced positive Phase 3 results and Priority Review of a U.S. regulatory submission, and food and environmental allergies.”

Dupixent is a targeted biologic therapy that inhibits signaling of interleukin-4 (IL-4) and interleukin-13 (IL-13), two key proteins that may play a central role in type 2 inflammation that underlies atopic dermatitis and several other allergic diseases.

“The approval of Dupixent for adolescents with moderate-to-severe atopic dermatitis means that for the first time these patients and their families, who often help them manage this debilitating disease, will have access to a first-of-its-kind biologic treatment that has already been used to treat approximately 50,000 patients in the U.S.,” said John Reed, M.D., Ph.D., Head of Research and Development at Sanofi. “Our Phase 3 data demonstrated that Dupixent treatment significantly improved skin lesions, reduced itching, and helped clear the skin of these adolescent patients.”

The FDA evaluated the Dupixent application under Priority Review, which is reserved for medicines that represent potentially significant improvements in safety or efficacy in treating serious conditions. Dupixent was also granted Breakthrough Therapy designation by the FDA for inadequately controlled moderate-to-severe atopic dermatitis in adolescents. The Breakthrough Therapy designation was created to expedite the development and review of drugs developed for serious or life-threatening conditions.

In the pivotal Phase 3 trial evaluating Dupixent monotherapy in adolescent patients with uncontrolled moderate-to-severe atopic dermatitis, the safety and efficacy were generally consistent with that previously seen in adult studies. At 16 weeks:

Dupixent has been studied in more than 7,000 patients 12 years and older in over 30 clinical trials. The safety profile of Dupixent in the adolescent trial was similar to the safety profile from trials in adults with atopic dermatitis, and consistent through 52 weeks. The most common adverse events were injection site reactions, eye and eyelid inflammation including redness, swelling and itching, pain in the throat (oropharyngeal pain) and cold sores in the mouth or on the lips.

Atopic dermatitis, a form of eczema, is a chronic inflammatory disease with symptoms often appearing as a rash on the skin. Moderate-to-severe atopic dermatitis is characterized by rashes that can potentially cover much of the body and can include intense, persistent itching, skin lesions and skin dryness, cracking, redness, crusting and oozing. Itch is one of the most burdensome symptoms for patients and can be debilitating.

About Dupixent
Dupixent comes in two doses (200 mg and 300 mg), each as a pre-filled syringe. Dupixent is intended for injection under the skin (subcutaneous injection) and is given every other week following an initial loading dose. It can be given in a clinic or, for convenience, at home by self-administration after training by a healthcare professional.

Dupixent is also approved in the U.S. for the treatment of adult patients with moderate-to-severe atopic dermatitis (eczema) that is not well controlled with prescription therapies used on the skin (topical), or who cannot use topical therapies; and for use with other asthma medicines for the maintenance treatment of moderate-to-severe asthma in people aged 12 years and older whose asthma is not controlled with their current asthma medicines. In 2016, the FDA granted Breakthrough Therapy designation for Dupixent for the treatment of moderate-to-severe (adolescents 12 to 17 years of age) and severe (children 6 months to 11 years of age) atopic dermatitis not well controlled on topical prescription medications.

Regeneron and Sanofi are committed to helping patients in the U.S. who are prescribed Dupixent gain access to the medicine and receive the support they may need with the DUPIXENT MyWay® program. For more information, please call 1-844-DUPIXENT (1-844-387-4936) or visit www.DUPIXENT.com.

Dupilumab Development Program
In addition to the currently approved indications, Regeneron and Sanofi are also studying dupilumab in a broad range of clinical development programs for diseases driven by allergic and other type 2 inflammation, including chronic rhinosinusitis with nasal polyps (Phase 3 completed), pediatric (6 to 11 years of age) atopic dermatitis (Phase 3), pediatric (6 months to 5 years of age) atopic dermatitis (Phase 2/3), pediatric (6 to 11 years of age) asthma (Phase 3), eosinophilic esophagitis (Phase 2/3), and food and environmental allergies (Phase 2). A future trial is planned for chronic obstructive pulmonary disease. Dupilumab is also being studied in combination with REGN3500, which targets IL-33. These potential uses are investigational and the safety and efficacy have not been evaluated by any regulatory authority. Dupilumab and REGN3500 were invented using Regeneron’s proprietary VelocImmune® technology that yields optimized fully human antibodies, and are being jointly developed by Regeneron and Sanofi under a global collaboration agreement.