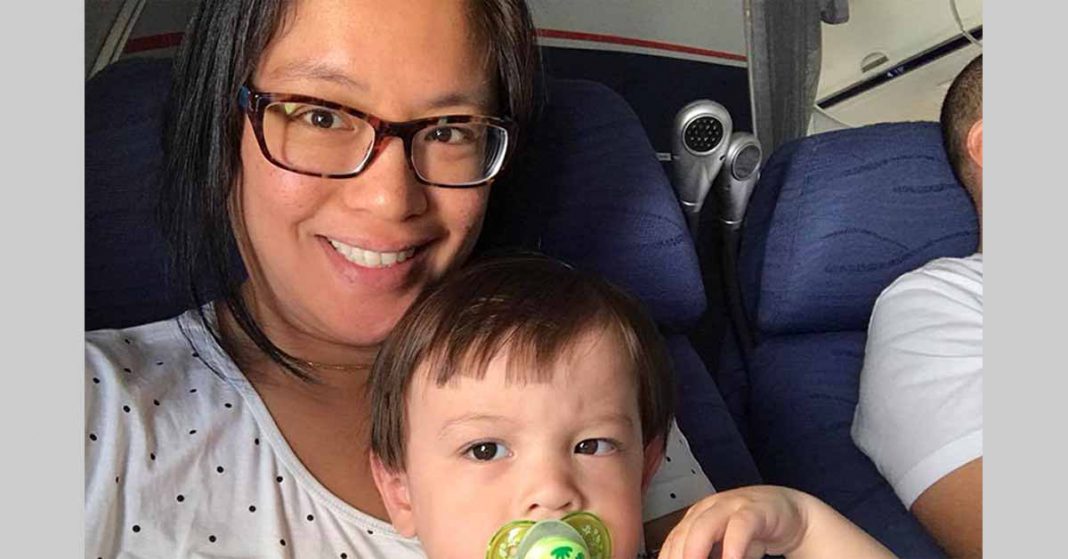 Tricia Powell’s brush with death on a flight home from Disney World with her family is a salient example of why peanuts and tree nuts should be banned from all flights.

Please read Ms Powell’s harrowing tale of anaphylaxis suffered after nuts were served on a flight where the airline had committed not to serve nuts, then sign her petition on Change.org which has already garnered close to 44,000 signatures.

A year ago today I almost lost my life.

I have severe food allergies, many of which can lead to an anaphylactic reaction. August 2017, Our Disney World family vacation was memorable. The resort was beyond accommodating to my needs. The head chefs came out to make sure that I would not come in contact with any of my allergens. I truly felt safe.

However, I cannot say the same about an American airline. Calling ahead to make them aware of my severe nut allergies a representative reassured us that our flights would not be serving any nuts as they don’t do this any further. The departure flight home was chaotic with an overbooked flight with a smaller plane, several gate changes and being separated from my daughter and husband was the least of my worries that day.

Mid flight without an announcement and with my 1 1/2 year old son on my lap I was the last to be asked if I would like a snack. I turned to a stewardess holding trays of mixed nuts just roasted by the stewardess. I declined and told her of my severe nut allergy. She replied she was not serving “peanuts.” In which I responded I’m allergic to “all nuts.” She then continued to ask the gentlemen next to me if he would like them. He immediately declined after hearing about my allergy.

I immediately went to tell my husband. I then hid in the bathroom hoping to get away from the nuts but it was too late. When I went back to my husband my lips were pale and my voice was raspy. I immediately returned to my seat to get medication and hit the call bell.

In front of my husband, son, co-passenger and stewardess I could no longer speak nor breathe. With tears in my eyes I administered my epi-pen but there was no relief. I jabbed the second needle and gasped for air.

My husband is a surgeon and asked what medical supplies they had. Oxygen was then provided. Another stewardess applied an ice pack to the back of my neck, why I do not know. Unable to speak I frantically pointed to her hands because she was wearing latex gloves which I’m also allergic too, afraid she would make my reaction even worse. My husband noticed and told her to stop touching me, she is allergic to your gloves.

A response to the epinephrine, I violently shook uncontrollably. I sat there struggling still for air helpless in front of my crying son. All I could think of is that I did not want to die before him and I have not seen my daughter who was asleep in the rear of the plane where my husband and her were seated. I was not ready to leave my babies.

With no protocol in place and a response from the flight team that they rely on onboard medical personnel to make flight decision, my husband made the call to divert the plane into Charolette, North Carolina. An emergency landing was called overhead by the captain and he apologized for the inconvenience for any connecting flight delays.

Still shaking I could not put my seatbelt on. We were descending quickly and my husband finally noticed. The medics took me off the plane and administered IV medications as directed by my husband. My daughter woke to witness everything. I was rushed to meet another team of medics outside to take me to the hospital.

In the ambulance the medic told me I was stable and we were not far from the hospital. He then replied to the driver priority 3 and that’s all I remember.

My husband told me what happened next. The medic calls out “it’s getting hot in here” which means a problem has arisen and now priority 1. Lights, sirens and speeding off they went. My husband turned to see me sliding off the stretcher with the turns as the medic rescue breathed me. He covered the kids eyes as my lifeless body rolled in front of the ambulance into the hospital as they continued to ventilate my lungs.

I slowly awoke to bright lights, nurses and monitors. The doctor told me I did not look so good coming in. A tracheotomy and intubation tray lay on the counter. My Glasgow coma scale was 3, the lowest score and completely unresponsive. I was lucky that my husband advocated to divert the plane. After resuscitation and prolonged monitoring in the ER, I was admitted overnight for observation to monitor for a secondary reaction since my vitals were still concerning and I was still not able to talk well from the reaction and epi.

My family was stranded with nothing more than a bag of supplies for the two hour flight home as our luggage was still on the plane en route to PA. After many phone calls with family from all over the country the decision was made to contact American Express, who helped make emergency accommodations and the hotel was kind enough to provide diapers and soy milk for the children. It was the first time I would be separated from my children overnight.

With no other way plausible to get home and with my absolute fear of airplanes we finally decided to drive home. My father and sister drove our car 12 hours to come get us since we had no car seats. And then a 12 hour arduous drive straight back.

I have a previous medical condition called thoracic outlet syndrome (TOS) that causes me to lose my pulse in my left arm. Causing a compression sensation and lost of feeling from my arm to my hand. I had been in remission and even was holding my son the night before in my left arm. The incident directly lead to severe pain and discomfort down my left arm. To the point I was not able to have full range of motion, loss sensation and was not able to hand things in my hand or pick up anything of size. With my condition worsening I started physical and occupational therapy. I went back to Johns Hopkins and got Botox injections into the muscle and this time it did not work. I ended up needing the last resort and major surgery to treat TOS, a first rib resection, scalene and pectoralis minor muscle separation 4 days before Christmas, 6 months after this incident.

I’m 8 months post op and can barely lift my son just a few times a day. My daughter and I are both suffering from post traumatic stress disorder and are both going to therapy. My daughter says to us she does not want to go onto a plane as she feels that I will lose my voice again and possibly die. So many people do not understand the severity of food allergies it’s not one chooses to have. It’s something I would not wish on my worse enemy. I never want someone else to go through what I endured. Protocols need to be in place and changes need to be made to what is served on airplanes. People need to come before profits. My family applauds Southwest Airlines for their decision to make these changes. We can protect our children in schools from nut allergens but nothing can be done for those flying 30,000 feet in the air. Can’t we all be safe while flying? So nuts really need to be the snack of choice? Or is this really a profit agenda.

We have spoken to 12 different lawyers in several states who either were not interested, interested but felt no money would be made, felt if I actually died we would have a better case and one who actually did his homework and felt we have a case however the airlines as the monopoly they have set up could roll over anyone trying to sue and you could end up having to pay all the court and lawyer fees. I am writing this post after a 1 year hiatus from social media and on the anniversary of the event to inform all those interested of the little care or compassion airline corporation have for people. Remember they care more for your bag fees than they do for you. Please pass this message along as it may save a life and that is all that matters. One day we can have change and maybe one day I can step on an airplane again.