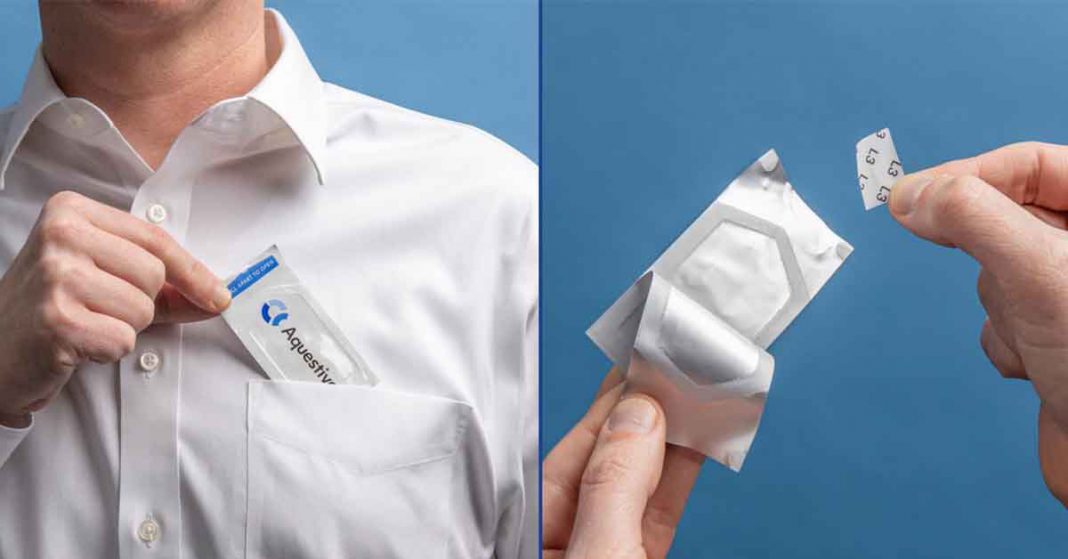 Aquestive Therapeutics — the company behind a needle-free, postage-stamp-sized emergency epinephrine treatment you place under your tongue — provided an update to their EPIPHAST clinical trial at this year’s ACAAI annual meeting in Louisville, KY.

Their candidate, AQST-109, is based on a PharmFilm technology called DESF that has been found to deliver sufficient concentrations of epinephrine to the blood faster than intramuscular injections via auto-injector according to their study. It does this without an injection or concerns for tolerability.

Said John Oppenheimer, MD, FAAAAI, clinical professor of medicine at UMDNJ Rutgers and a co-author of the study to Healio:

Studies have shown that patients and their parents are resistant to carrying auto-injectable epinephrine and have fears regarding use of needles in some cases.

The researchers assert that the current means of delivering emergency epinephrine suffer from a number of drawbacks, including the lack of availability at the time of anaphylaxis, inadequate patient education, failure to administer in a timely manner, and accidental administration. Many of these are related to the auto-injector form factor, the complexity of the devices, and fear of the needle.

Oppenheimer went on to say:

Thus, a smaller alternative form of epinephrine without a needle would likely be used to fill present gaps and unmet needs.

To determine the most effective doses and formulations of AQST-109, EPIPHAST — a randomized, open-label, three-part, adaptive-design crossover study — compared seven configurations of DESF and their resulting pharmacokinetics (PK) and pharmacodynamics (PD) in 16 healthy volunteers per formulation and dosage, along with a control group of 16 who received 0.5 mg intramuscular injection of epinephrine.

One formulation was found to be the fastest at achieving clinically meaningful concentrations in the blood with median times to maximum concentration of 15 minutes at a 10mg dose and 22.5 minutes at 12mg. It also provided a consistently faster delivery with similar peak exposure levels when compared to 0.3 mg injected epinephrine.

The researchers concluded the results from the 12mg dose were comparable to those of a first-in-human study and to those that have been reported for intramuscular injections of epinephrine with adverse event profiles and tolerability similar across all the formulations and dosages.

The next step will include further validation in larger numbers.