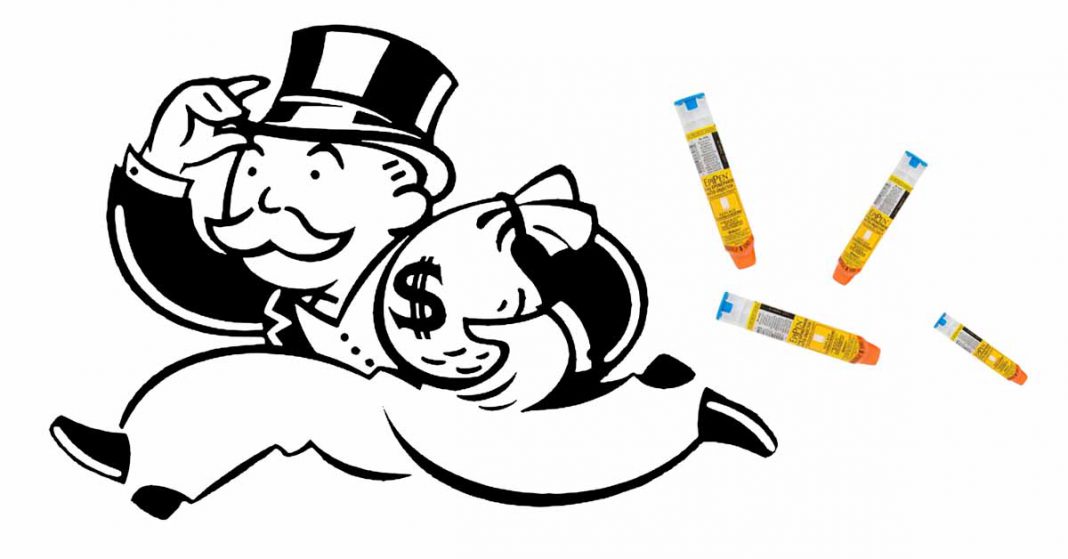 Prompt administration of epinephrine can mean the difference between life and death for a food allergy sufferer experiencing anaphylaxis, a severe, sometimes fatal reaction to an allergen. That’s why those that have been diagnosed with an allergy to specific foods are encouraged to carry two epinephrine auto-injectors with them at all times, wherever they go.

Back in 2015, there were three epinephrine auto-injectors approved for the US market: EpiPen by Mylan — by far the dominant product with a 90% market share — Adrenaclick by Impax, and Auvi-Q, a relatively new entrant at the time manufactured and marketed by Sanofi.

In February 2016, Sanofi announced it was abandoning their product, leaving Mylan’s EpiPen as a sole option for emergency epinephrine in many pharmacies. (Rights to Auvi-Q reverted to the developer Kaléo who re-launched the product in 2017.)

In April of the following year, Sanofi filed suit against Mylan alleging anti-competitive behavior that caused Sanofi to lose hundreds of millions of dollars in sales by erecting barriers to competition with the EpiPen brand. The suit claimed Mylan offered rebates to commercial and state insurers and pharmacy benefit managers (PBMs) on the condition they not offer reimbursement for Auvi-Q.

In a recent filing in the case, Sanofi is seeking up to $11.7 billion from Mylan for the alleged scheme. The preliminary statement is a must read to understand the machinations that go on behind the scenes that deny the allergic consumer options and price competition:

To hear Mylan tell it, this is a case in which it merely engaged in modest and common price competition and the only reason it prevailed is because Sanofi (i) “chose” not to compete on price and (ii) was forced to recall the Auvi-Q. This is a fairy tale. In reality, this is a classic antitrust case involving a monopolist driving its competitor out of the market through anticompetitive conduct for no legitimate business reason other than to maintain its monopoly power.

First, Mylan did much more than engage in price competition. In anticipation of Auvi-Q’s launch, Mylan did not innovate the EpiPen or lower prices to make the EpiPen more competitive: it did just the opposite. Mylan raised the price of the same old EpiPen by more than 30% in the 12 months leading up to Auvi-Q’s launch and more than doubled the price of EpiPen in the years that Auvi-Q was on the market so that it could set up its anticompetitive scheme of coercive rebates conditioned on excluding Auvi-Q and denying millions of children and adults at risk for anaphylaxis the opportunity to choose a new and innovative treatment option. As Mylan put it, “we will only pay rebates” to payors if they are “willing to exclude Auvi-Q.” Mylan was able to do this because it was a monopolist, with a stranglehold on more than 90% of the U.S. epinephrine auto-injector (“EAI”) market before Auvi-Q’s launch.

Second, once Mylan secured exclusive arrangements locking Auvi-Q out from critical
access to the market, it used every other tool in the shed to “hammer” Sanofi. It was not remotely fair competition on a level playing field when Mylan lied to government agencies in order to pay lower fees for Medicaid coverage and then used the ill-gotten gains to fund their deep conditional rebates for commercial payors. Nor was it fair competition to mislead consumers about the safety and effectiveness of Auvi-Q or improperly obtain and misuse competitively sensitive information to create an uneven playing field. No traditional competitor puts “strings attached” to budget constrained schools requiring them not to stock a single life-saving Auvi-Q if they also want the cheapest available EpiPen. Mylan had no legitimate business reason for its conduct. This companywide scheme was endorsed by the most senior executives of the company who have lined their pockets from wrongdoing. The purpose was simple: crush an innovative and superior new product in order to protect the $1 billion per year crown jewel EpiPen. The antitrust laws of this country do not permit this kind of behavior by a monopolist.

Third, Mylan’s scheme to maintain its monopoly hurt consumers and competition. Fiona Scott Morton, a Ph.D economist at Yale and pharmaceutical industry expert who served as Deputy Assistant Attorney General for Economic Analysis with the Antitrust Division of the Department of Justice, has concluded that Mylan’s conduct was anticompetitive and cost patients—in the form of higher prices, lower output, reduced quality and innovation, and less choice.

Fourth, Mylan’s breaking of the competitive process also harmed Sanofi significantly. Sanofi expected Auvi-Q to be an important growth-driver throughout the life of its patents through 2029. And given that EpiPen was a $1 billion per year product at the height of Mylan’s monopoly, it is no surprise that Sanofi’s damages total nearly $4 billion.

As set forth below, there is abundant evidence to create genuine issues of material fact to deny summary judgment and have a jury to decide whether Mylan illegally maintained its monopoly power through exclusionary or anticompetitive conduct.

It remains to be seen how this long-running suit eventually plays out. In the meantime, Mylan remains squarely in the spotlight as a result of shortages of EpiPen caused by manufacturing issues.

Luckily, there are more options for emergency epinephrine available today including Auvi-Q reintroduced by Kaleo, the Adrenaclick Generic by Amneal, a generic EpiPen equivalent from Teva, and Symjepi, a prefilled, single-dose syringe from Sandoz. You can see all the options at the time of this writing by clicking here.

Note of Disclosure: Kaleo is an advertiser with SnackSafely.com
Print or share this article
Print
Mail
Tweet
Share
Click to visit sponsor
Previous article
The Future of EpiPen in Light of the Mylan-Pfizer Deal
Next article
Watch: 'Spell it Out', A New Public Service Announcement About Food Allergies