Study: Anaphylaxis in Schools, Stock Epinephrine, and the Importance of "Take 2" 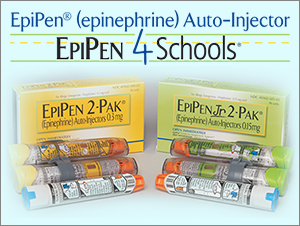 On February 23rd at this year’s annual meeting of the American Academy of Allergy Asthma and Immunology (AAAAI) in Houston, a study was presented regarding incidence of anaphylaxis in schools during the 2013-2014 school year, confirming the need for stock epinephrine.

Of 5683 schools that responded to the study survey, a total of 919 anaphylactic events were reported by 11% of the schools. Here’s a quick breakdown:

All respondents were schools enrolled in Mylan’s EpiPen4Schools© program and had stock epinephrine on hand provided at no cost by the firm. Food Allergy Research and Education (FARE) reports that stock epinephrine was used in 310 events even though epinephrine is recommended as the first line treatment for anaphylaxis. This may be largely due to the limited number of staff trained in the use of epinephrine administration.

Here’s an item that should not be overlooked in FARE’s announcement (emphasis ours):

A second epinephrine injection was given in 9 percent of cases, emphasizing the need for individuals to carry two prescribed auto-injectors with them at all times, as well as the need to have extra auto-injectors on hand in case the need arises.

Please take this opportunity to download a set of flyers from our “Take 2” campaign, reminders to post at home, school, and everywhere else reminding you to “Take 2 epinephrine auto-injectors along everywhere, every time.”

Flyers from Our “Take 2” Campaign 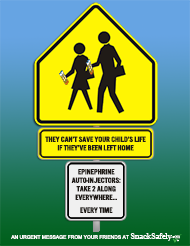 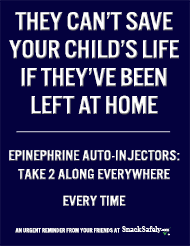 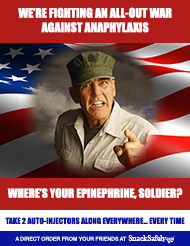 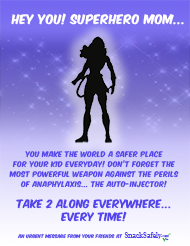 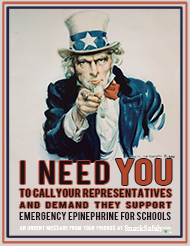 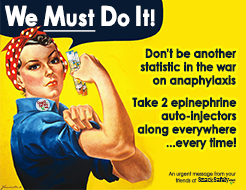