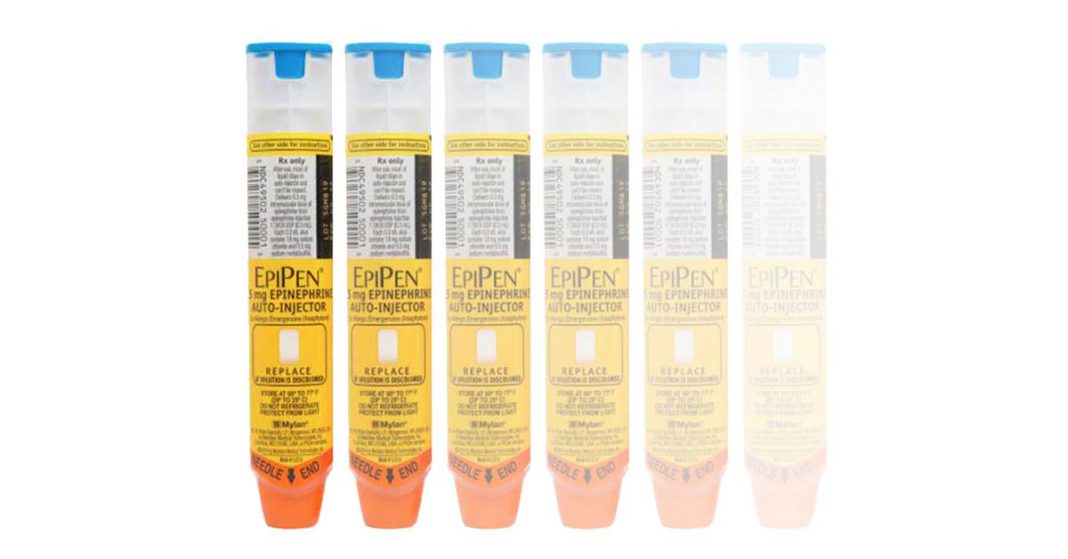 McLEAN, Va. (May 7, 2018) – Food Allergy Research & Education (FARE) calls on the Food and Drug Administration (FDA), the Department of Health and Human Services (HHS)and the Trump Administration to take immediate action to address a growing national shortage of epinephrine auto-injectors. Epinephrine is the first-line treatment for anaphylaxis, a serious and potentially life-threatening allergic reaction associated with severe food allergies. Delayed use of epinephrine during an anaphylactic reaction can lead to death.

FARE wrote to FDA Commissioner Scott Gottlieb on May 1 to express concerns with the lack of availability of these devices. On May 3, the American Society of Health-System Pharmacists (ASHP) determined that there was a national shortage of epinephrine auto-injectors covering two of the three manufacturers currently selling FDA-approved products in the U.S., Mylan Pharmaceuticals (maker of EpiPen®, EpiPen Jr.®,and authorized generic versions of both) and Impax Therapeutics (maker of an authorized generic of Adrenaclick).

The only FDA-approved product currently sold in the U.S. that has not reported any shortage or supply issues is kaleo’s Auvi-Q®. All of the FDA-approved therapies contain the same medicine, epinephrine, but the delivery device – and instructions for using it in an emergency – are different for each product. Many patients rely on EpiPen and EpiPen Jr. (or their authorized generics).


Click to visit sponsor
The U.S. shortage follows an ongoing shortage of these devices already determined in Canada and the United Kingdom. They have been reporting issues with patient procurement of EpiPen and EpiPen Jr. for several months.

FARE calls on FDA to declare that the current lack of availability of epinephrine auto-injectors represents a national shortage, not just a “spot shortage” (as reported to Allergic Livingon April 30.) Among other criteria, FDA considers a product to be in shortage if “there is notice from the public or practitioners about the lack of product available in the market.”

Moreover, FARE recommends that FDA take specific action to notify and inform the public, including healthcare providers, insurance companies, and patients, including:

Click to visit sponsor
Congress granted new authorities for FDA to address drug shortages, including mandatory reporting requirements for manufacturers, in the Food and Drug Administration Safety and Innovation Act of 2012 (FDASIA). FDA should use those to:

Demand that Mylan, the manufacturer of EpiPen®and EpiPen Jr.®, inform the public as to actions the company is taking to address the shortage and a timeline for making available additional supplies.

Understanding that a Pfizer subsidiary manufactures the products for Mylan, demand that Pfizer inform the public as to actions the company is taking to address quality problems cited in FDA’s September 2017 Warning Letter, and compel Pfizer to disclose any correlations between those concerns and the current shortage.

Work with Mylan and Pfizer to expedite the approval of new production lines or raw materials, as applicable, to increase supplies worldwide.

FDASIA also permits FDA to take additional actions to address shortages of drugs that are “life-supporting, life-sustaining; or intended for use in … emergency medical care” such as epinephrine. FARE respectfully requests that FDA consider using all available legal remedies to address this shortage, including:

Click to visit sponsor
Over the past two weeks, patients with food allergies have reported trouble obtaining prescriptions for epinephrine auto-injectors. As of April 24, Allergic Living reported problems filling the prescriptions in five states; those reports increased to 10 states by April 28, and to 14 states on April 30. At that point an FDA spokesperson told Allergic Living there was a “spot shortage”.”

FARE also developed a survey to determine the scope of the problem among its constituents. Since May 2, more than 400 people in 44 states have filled out the survey indicating that they have experienced difficulties filling or refilling prescriptions at their local pharmacies.

We asked if individuals who were not able to fill their initial prescription were able to get it filled with an alternative medication and found that only one-third had. Some respondents indicated trouble with insurance coverage as a reason for not obtaining an alternative.

The overarching theme among survey respondents is frustration. The following are direct quotes from FARE’s survey:

FARE’s monitoring has pointed to a shortage felt by patients in almost the entire country, not necessarily a “spot shortage.”


Click to visit sponsor
Mylan and Pfizer, which distribute and manufacture this medication, have not provided clarity on supply issues.

Advice for Patients Patients who are experiencing difficulties obtaining the epinephrine auto-injector of their choice due to the shortage should speak to their physicians about getting a prescription for a different auto-injector so that they can have a prescription filled promptly and there is no interruption in the accessibility of this medication. In absence of a current epinephrine auto-injector, patients may use an expired dose but should call 911 and receive medical treatment.

Food Allergy Research & Education (FARE) works on behalf of the 15 million Americans with food allergies, including all those at risk for life-threatening anaphylaxis. This potentially deadly disease affects 1 in every 13 children in the U.S. – or roughly two in every classroom. FARE’s mission is to improve the quality of life and the health of individuals with food allergies, and to provide them hope through the promise of new treatments. Our work is organized around three core tenets: LIFE – support the ability of individuals with food allergies to live safe, productive lives with the respect of others through our education and advocacy initiatives; HEALTH – enhance the healthcare access of individuals with food allergies to state-of-the-art diagnosis and treatment; and HOPE – encourage and fund research in both industry and academia that promises new therapies to improve the allergic condition. For more information, please visit www.foodallergy.org and find us on Twitter @FoodAllergy, Facebook, YouTube and Pinterest.