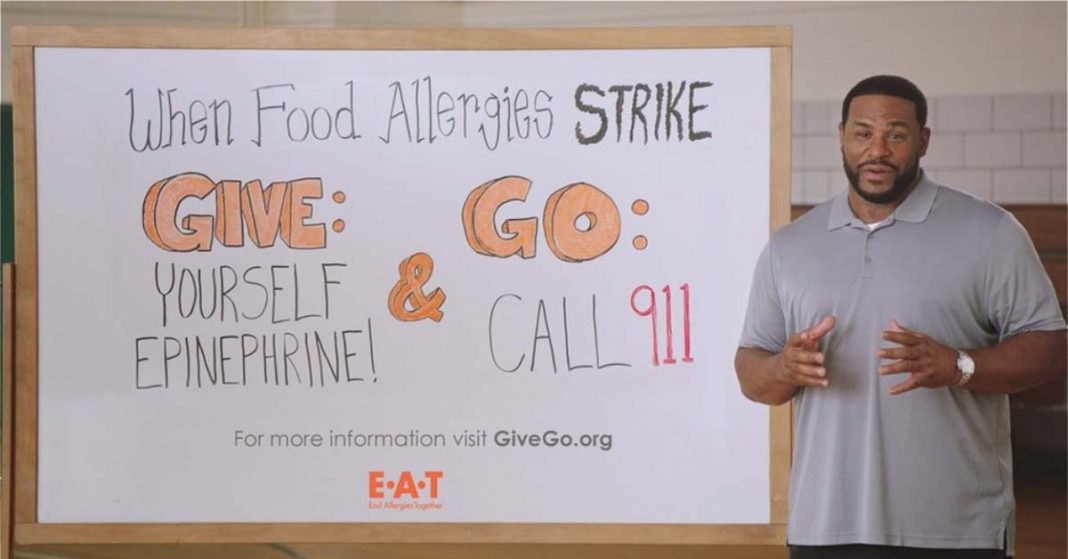 PSA Will Air in Movie Theaters and Online

FAIRFIELD, CT, Aug. 23, 2018 /PRNewswire/ — End Allergies Together (E.A.T.), a non-profit organization that funds research to help solve the growing food allergy epidemic, has joined forces for a second time with award-winning advertising agency BBDO New York to produce a Public Service Announcement called “Give and Go” to promote the importance of giving epinephrine and going to call 911 during anaphylaxis, a severe allergic reaction to food that can be fatal.  Starring Hall of Fame football player Jerome Bettis, the PSA will empower people to know what to do when a severe food allergy reaction strikes. It will launch online and begin airing later this month in movie theaters. Singlecare, which helps provide affordable prescription and health costs, is the presenting sponsor of this PSA.

Food allergy is a growing epidemic that barely existed 40 years ago and now nearly 17 million people in the United States have food allergies1, and one in 12 children are diagnosed, according to a study in Pediatrics, a journal published by the American Academy of Pediatrics. Every two to three minutes someone goes to the emergency room due to a food allergy-induced, life-threatening anaphylactic reaction2. Symptoms can include: rash, hives, nausea, swelling, difficulty swallowing and shortness of breath. Click here for additional symptoms and details.

A recent review in the Journal of Asthma and Allergy states: “Epinephrine is the only effective treatment for anaphylaxis but studies routinely show underutilization. This is especially troubling given the fact that fatal anaphylaxis has been associated with delayed administration of epinephrine.”3

The authors detail the many barriers to use including the recent high cost of epinephrine, not having it on hand during a reaction, and confusion in recognizing the symptoms of anaphylaxis.
“Just like there is  ‘Stop, Drop and Roll’ for fire safety, we need clear action for anaphylactic reactions. We hope our ‘GIVE and GO’ PSA will do just that: if you see or experience anaphylaxis symptoms, GIVE epinephrine and GO call 911 immediately,” said EAT co-founder Elise Bates (Wellesley, Mass.), whose 13-year-old daughter has severe food allergies. “We hope this campaign will save lives while we help scientists work on cures.”


Click to visit sponsor
Donna Mazyck, Executive Director, National Association of School Nurses, echoes the need for this educational campaign, “It’s time to prevent all loss of lives due to delayed use of epinephrine. EAT’s PSA is an important educational tool for learning that epinephrine is the first response to life threatening allergic reactions.”

The PSA portrays a high school basketball scene where a coach tries to teach players the age-old “give and go” basketball move. Instead, the players educate the coach about the “most important Give and Go – the one where you GIVE epinephrine and GO call 911 when you experience anaphylaxis.” Bettis, a food allergy sufferer himself, makes a cameo appearance and emphasizes the importance of this “Give and Go.”

“I know what it’s like to experience anaphylaxis from a simple bite of food,” said Bettis.  “I hope that this PSA inspires kids and adults to always carry epinephrine, use it at the first signs of anaphylaxis, call 911 and tell an adult.  Too many people don’t carry epinephrine and that has to stop.  I never go anywhere without mine and I hope others will follow.”

Bettis, the former Pittsburgh Steelers player, is one of the best all-time running backs in the NFL. When he was 15 years old, he discovered he had a shellfish allergy. He remembers eating shrimp fried rice, when halfway through, he says his throat shut down. “I was having trouble breathing, and my eyes were red and watering. That was a scary deal there,” Bettis recalled.
SingleCare’s sponsorship was critical in producing the PSA. To help people access the lowest price on epinephrine at the pharmacy counter, they are also offering a co-branded EAT-SingleCare card on their website at singlecare.com/EAT. “We got involved,” said Rick Bates, SingleCare’s CEO & Founder, “because we understand the increasing prevalence of food allergies and the high cost burden people with food allergies face when needing to fill epinephrine prescriptions, pay for doctor visits, purchase allergy and asthma medications and more. We are glad to fight in the battle against ever-increasing healthcare costs and help make life-saving medications more affordable.” The free EAT-SingleCare card helps people save up to 80% on prescription medications and is accepted at over 35,000 pharmacies nationwide. “Obtaining life-saving medications shouldn’t break the bank,” said Bates.


Click to visit sponsor
EAT put together a team of medical advisors and reviewers for this project which included experts in food allergy/anaphylaxis treatment and education, and leaders in both the development of CDC anaphylaxis guidelines and the American Academy of Pediatrics Allergy and Anaphylaxis Emergency Plan (www.aap.org/anaphylaxis).

Members of the Expert Advisory team include:

To watch the PSA in its entirety, please visit:  bit.ly/GIVEandGO90 To post on social media channels, please see 30-second and 15-second versions at https://we.tl/t-qvOnKiOJ4U  Please post with hash tags: #GiveandGo and #EndAllergies
Please visit www.GiveGo.org for more information about anaphylaxis, this campaign and additional resources.

This new PSA marks the second time EAT and BBDO New York have teamed up. Last year, they produced a PSA titled “Could you EAT?” which starred James Beard award-winning chef Ming Tsai to heighten awareness of the life-threatening dangers people with food allergies face every time they eat.  The PSA was well-received winning a Silver ADDY award (American Advertising Awards), racking up more than 50,000 views in less than 24 hours after it first aired, and more than 120 million media impressions to date.

About End Allergies Together (E.A.T.)End Allergies Together (E.A.T.) is a 501c(3) non-profit organization with the sole mission to accelerate treatments and cures for the growing food allergy epidemic. EAT’s investments advance scientific and medical research to accelerate diagnostics, treatments, cures and prevention of food allergy.  Two families, both affected by food allergies, started E.A.T after the striking realization that little public or private funds were being invested to solve the life-threatening condition. E.A.T was created to address this gap.