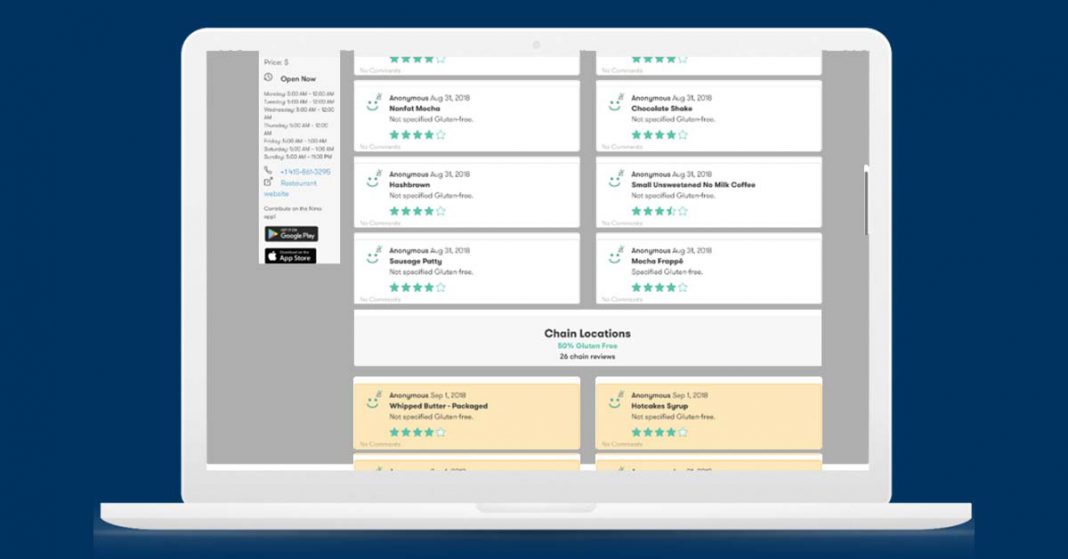 Nima’s new data points tell those with food allergies where to find Nima-tested dishes at chain restaurants throughout the world.

San Francisco, CA – February 7, 2019 – Today, Nima, the pioneer in connected food sensors, announced a new online tool that provides users with information on gluten-free and peanut-free dishes found at nearby chain restaurants. The findings are the results of a large testing initiative that aimed to give individuals with food allergies the ability to dine out with Nima-tested data from their favorite chains. Chains often have the same menu, use the same ingredients and prepare food following the same protocols. Having an idea of what dishes have tested gluten-free at one chain location can provide extra information on where to start at the location near you.

“One of our key values at Nima is data for decisions,” said Shireen Yates, CEO and co-founder of Nima. “Our ultimate goal is the democratization and transparency of data as it relates to food allergens and this new platform brings us one step closer to our mission.”

Nima staff tested menu items for the presence of gluten or peanut from over 100 popular chain restaurants using the Nima Gluten and Nima Peanut sensors. The dishes that were found to be free of these allergens were mapped to include all additional locations of the restaurant worldwide. This set of data resulted in over 250,000 restaurant locations being mapped and more than 3 million dishes being labeled as “Nima-tested” geographically across the globe.

Over 15 million Americans suffer from food allergies, making it potentially dangerous to eat foods they haven’t prepared themselves. Nima’s revolutionary Gluten Sensor and Peanut Sensor are the first, and only, pocket-sized devices that allow those with dietary restrictions to quickly test their food for allergens for added peace of mind at meal time. Now, Nima’s new free web application will allow users to find dishes in their area that are safe to eat simply by searching on a map of their area right from Nima’s website using their mobile device or computer.

It is important to note that these results do not account for any potential cross-contamination that may occur in Nima-tested restaurants. Users are encouraged to always practice due diligence, talk to servers and keep an EpiPen on-hand for emergencies.

“Nima is not designed to replace any of the precautions people with food allergies or sensitivities are already taking at mealtime,” Yates said. “Our program is designed to provide one additional data point that when someone does a search, they will get Nima-tested results, regardless of where they are located.”

Founded in 2013, Nima is a science-driven technology company making the world safer for people who want and need to know what’s in their food. Through people-friendly products that identify individual ingredients in food, and a growing community of users and data, every day Nima enables people to enjoy what’s on their plates. Co-founders Shireen Yates and Scott Sundvor created Nima out of personal experience with food intolerances. To date, Nima has raised more than $15 million, including financing from Foundry Group, Upfront Ventures, SoftTech VC, SK Ventures and Lemnos Labs, with additional federal grants from the National Institutes of Health. For more Nima news, visit our blog or press section.