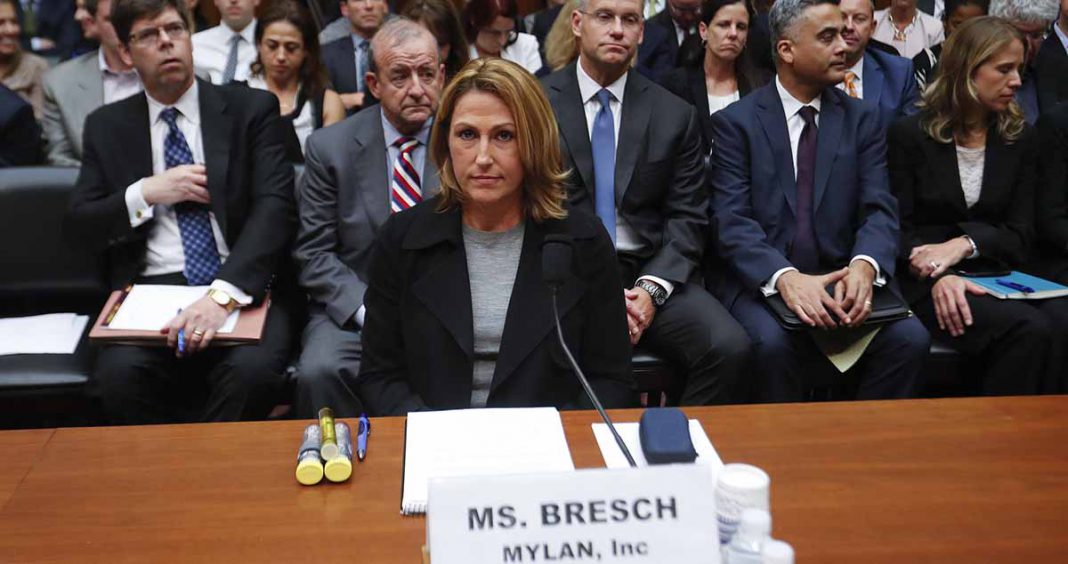 Documents released as part of an antitrust suit against Mylan, the marketer of EpiPen, show that then-president and CEO Heather Bresch worked directly with the CEO of Pfizer to corner the market on epinephrine auto-injectors and raise prices artificially high. Bresch is the daughter of West Virginia Senator Joe Manchin.

In one e-mail with the subject “Our Discussion”, Bresch confirms with her counterpart at Pfizer their plan to have Pfizer divest from Adrenaclick, a competing auto-injector product to Mylan’s EpiPen. By doing so, EpiPen would stand alone with a virtual monopoly on the epinephrine autoinjector market:

I’m sending you this email as a reminder that you were to send me confirmation relative to our discussion regarding EpiPen. In that discussion, you indicated that you would be divesting your Adrenaclick product once the Pfizer/King deal closes. I understand your tender offer is closing today, so I would appreciate receiving your response as soon as possible.

Back in 2007, Mylan acquired the rights to EpiPen after acquiring special pharmaceutical subsidiary Dey from Merck. At the time, the cost of two auto-injectors was less than $100.

With a virtual monopoly in place, Mylan went on to the next phase of their plan called “Project X2”: discontinuing the sale of EpiPen in single packs by only selling the product in two-packs.

Meanwhile, in 2010, Gayle Manchin, Bresch’s mother, lobbied states to require schools to stock epinephrine as the head of the National Association of State Boards of Education.

In May 2011, Mylan’s medical professionals were concerned that there was no medical rationale for Project X2 according to an email COO Lloyd Sanders sent to Bresch, but after Bresch “learned that the co-pay that ‘most’ patients pay is the same for a single as it is for a two-pack, she became VERY motivated to pull the singles.” So the company sought to create a rationale for the move.

Here is a memo from Ivona Kopanja, an associate project manager in Mylan’s marketing and sales operations division, sent to two other employees in March 2011:

Senior management is having a meeting with Heather April 1 and wanted to provide her with an update on Project X2. I know that you were working on creating a ‘medical’ rationale for Project X2? I’m pulling a slide deck together that will be used. Would you be able to forward me the information I should include for the rationale (and the way it should be worded)?

That August, the single-pack EpiPen was eliminated from sale in the US. Mylan concluded there was no “need to call/write FDA,” as “it’s not necessary and will raise more questions than we have answers,” according to an email quoted in the order.

That October, with no competition to speak of, Mylan began raising prices on EpiPen, a process that continued until Bresch was called before the House Committee on Oversight and Government Reform in September of 2016. By that time, the price of EpiPen had ballooned from $100 to over $600 per pair.

Get 25% Off the Perfect Back-to-School Treat for Lunch or Breakfast on the Go! (Sponsored)

Print or share this article
Print
Mail
Tweet
Share
Click to visit sponsor
Previous article
USF Begins Recruitment for OIT Study Addressing 15 Food Allergies at Once
Next article
Get 25% Off the Perfect Back-to-School Treat for Lunch or Breakfast on the Go! (Sponsored)