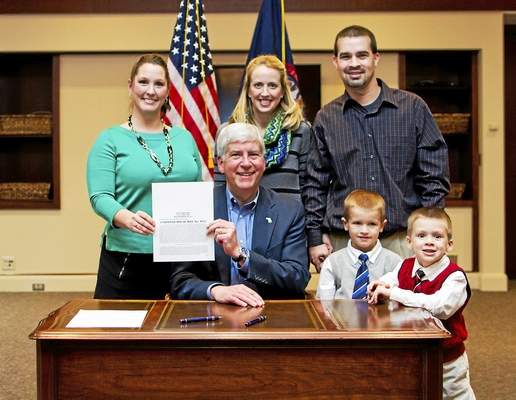 On Tuesday, Michigan Governor Rick Snyder signed bills into law paving the way for epinephrine auto-injectors to be stocked at public schools throughout the state beginning with the 2014-2015 school year.

Taken together, House Bills 4352 and 4353 provide for the following:

Lisa Rutter, founder of the No Nuts Moms Group, was present at the signing with her family.

We at SnackSafely.com applaud the efforts of the Michigan legislature and governor to safeguard all Michigan students from anaphylaxis – a serious and sometimes fatal reaction to allergens in food and the environment. The Michigan legislation serves as a model for other states in the wake of the signing of the federal School Access to Emergency Epinephrine Act into law by President Obama. We encourage all remaining states to move quickly to adopt similar legislation.