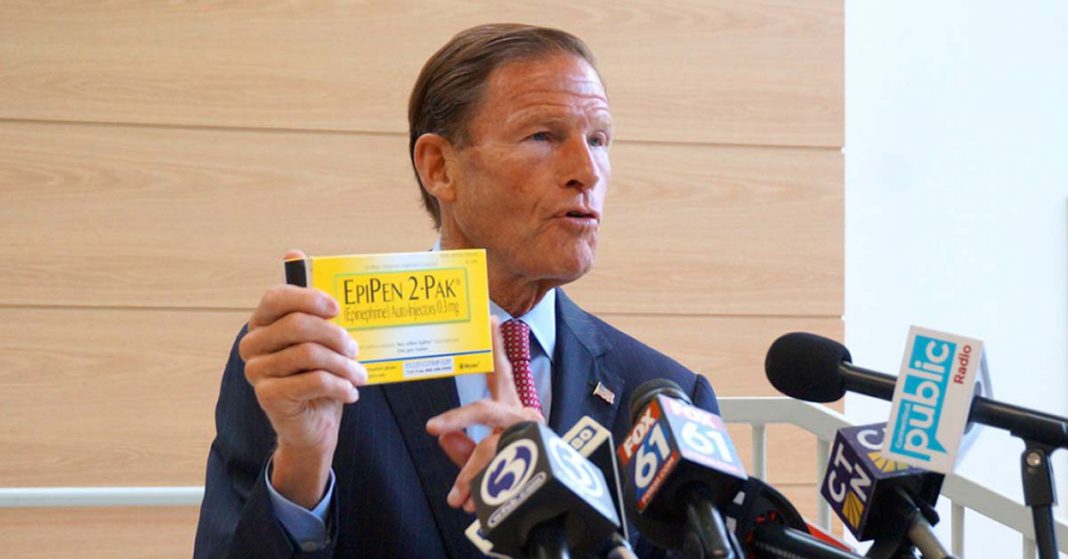 Even if you can find an EpiPen given the current nationwide shortage, there’s a good chance you may not be able to afford it depending on your income and insurance (or lack thereof.) List prices have risen from $57 to $600+ per pair over the years resulting in Heather Bresch, Mylan’s CEO, being called to testify before the House Committee on Oversight and Government Reform two years ago. Mylan is the exclusive marketer of EpiPen.
Shortly after the hearing, Mylan introduced an unbranded “generic” version, – identical to EpiPen – retailing for $300 and the whole episode was forgotten. Until now.
At a press conference held Monday, Senator Richard Blumenthal (D-CT) announced he will introduce the Cure High Drug Prices Act, which if passed will be the first federal price-gouging statute applied to drug pricing.


Click to visit sponsor
“If prices are unduly high, if they rise by an exorbitant amount — say 10 percent or more — the Department of Health and Human Services could order that there be a justification,” Blumenthal said. “If there’s no justification based on the cost of the ingredients, for example, they could order the price be rescinded, refunds to individual consumers and a civil penalty.”
He said the bill was necessary “because there is no price gouging statute that affords this kind of remedy” and that it was “long overdue.”
In a letter dated Aug 27 to Health and Human Services Director Alex Azar addressing the shortage, Blumenthal stated: “I write to you regarding the persistent, serious shortage of the widely used EpiPen Auto-Injector as we begin a new school year. As you know, this life saving drug provides treatment and security to millions of Americans, including children, who suffer from severe allergies. The prolonged shortage of EpiPen is simply unacceptable. I urge the Department of Health and Human Services (HHS) to work with insurers to help make available epinephrine auto-injectors, whether domestic or imported, so that children and families can access these lifesaving products as this unacceptable shortage persists.”

Click to visit sponsor
Pfizer, the manufacturer of EpiPen has attempted to address the shortage by extending the expiration dates on certain lots of EpiPen. “Which should be a signal that it’s meaningless in the first place,” the senator said in reference to the expiration date. “The FDA needs to look at itself in the mirror.”
“We’re not talking here about an exotic, rare disease that’s recently discovered,” said Blumenthal. “We’re talking about a workhorse drug. It is a matter of life and death for kids when they have emergency reactions,” Blumenthal said. We at SnackSafely.com applaud Senator Blumenthal’s initiative which will likely face fierce opposition from the pharma lobby and their representatives. We encourage you to reach out to your senators and demand they support the ‘Cure High Drug Prices Act’ once it is introduced.
Source: Sen. Blumenthal Introducing EpiPen Legislation To Address ‘Price Gouging’ – The Hartford Courant
Print or share this article
Print
Mail
Tweet
Plus
Share
Share
Facebook
Twitter
Pinterest
Linkedin
WhatsApp
ReddIt
Mix
Email
Print
Click to visit sponsor
Previous articleBack-to-School Check: Did You Update Your Child's Food Allergy Emergency Plan?
Next articleIn Response to Shortage, AUVI-Q® Will Be Available in Canada Starting September 7